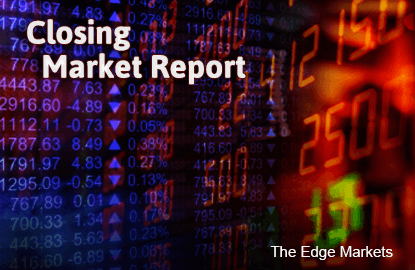 KUALA LUMPUR (July 30): The FBM KLCI settled for a 0.93-point increase, while the ringgit weakened in anticipation of US interest rate hikes this year, as the world's largest economy recovers.

Reuters reported that the dollar jumped and world stocks were left flat-footed on Thursday, after the Federal Reserve painted a relatively bright picture of the U.S. economy, boosting bets that it will hike interest rates in September.

Malaysia's KLCI closed at 1,699.92 points on losses in stocks like CIMB Group Holdings Bhd and Genting Malaysia Bhd. Earlier, the KLCI saw an intraday high of 1,706.26.

Commenting on the KLCI's earlier movement, Lee Cherng Wee, a senior analyst at JF Apex Securities Sdn Bhd, said the index rebounded after declining for the past six days.

Lee said the KLCI's advance was supported by gains in US markets.

“This is a technical rebound by the index (KLCI), after falling for the past few days. The higher close by US and Europe overnight had also supported today’s rise,” he said.

In currency markets, the ringgit weakened to 3.8190 against the US dollar, as US rate hike prospects led to demand for US dollar-denominated assets.

Such outlook has not augured well for Asian shares as well. South Korea’s Kospi fell 0.91%, while Hong Kong’s Hang Seng was down 0.49%.

Across Bursa Malaysia, 1.62 billion shares, worth RM1.58 billion, were traded. Decliners edged gainers at 401 against 383, while 354 counters were unchanged.