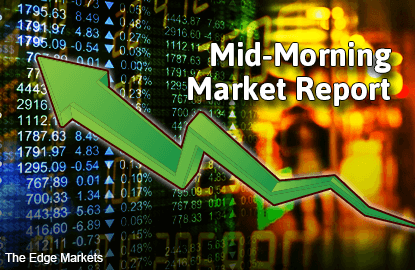 KUALA LUMPUR (Feb 15): The FBM KLCI sustained its gains at mid-morning today with the rebound at most regional markets, lifted by select blue chips.

Asian shares bounced on Monday, though investors feared fireworks as Chinese markets reopen after the long Lunar holidays to find there had been a major reversal in the US dollar and a worldwide rout in equities, according to Reuters.

Rallies in European bank stocks and on Wall Street on Friday helped soothe jitters enough for MSCI's broadest index of Asia-Pacific shares outside Japan to rise 0.7%. That follows a loss of almost 4% last week, it said.

Hong Leong IB Research said persistent external headwinds and ongoing February reporting season coupled with the reopening of Shanghai Stock Exchange today are likely to weigh on the FBM KLCI in the short term, with potential downside risks towards 1,600–1,622 zones.

"Overall, the FBM KLCI is likely to trap in short-term consolidation given the external headwinds, unless it can swiftly reclaim above the key resistances of 1,674–1,690 congested territory," it said.