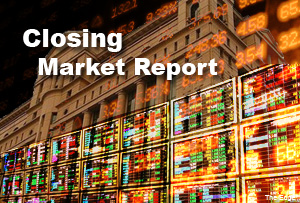 From a technical viewpoint, Lee said the KLCI's marginal decline followed the index’s failure to break past the 1,860 resistance level.

TA Securities Holdings Bhd said in a note today it lowered the immediate support for the KLCI towards 1,800 points.

Across Bursa Malaysia, 1.7 billion shares worth RM1.7 billion were traded. Market gainers trailed decliners by 245 versus 553 while 307 counters were unchanged.

Reuters reported that Asian shares were resilient in the face of a cooling Chinese economy while oil prices flirted with multi-year lows - unable to stem a drawn-out decline on fears of a glut.

Growth in China's industrial output declined more than expected to 7.7 percent from a year earlier, while fixed investment growth slumped to a 13-year low, and the tempo of retail sales slowed.