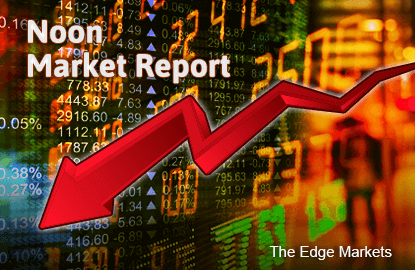 KUALA LUMPUR (Aug 24): The FBM KLCI fell 1.81% at the midday break today as decliners hammered advancers in line with the slump at regional markets.

Asian stocks slumped to three-year lows on Monday as a slump in Chinese equities gathered pace, hastening an exodus from riskier assets as fears of a China-led global economic slowdown churned world markets, according to Reuters.

A 2.6% fall in S&P 500 mini futures to a 10-month trough during Asian trading hours suggested the falls could continue later in the global session, it said.

AffinHwang Capital Research said more downside was anticipated in the near future.

“Volatility in currency and commodity markets remains while additional risk could be added from correction in the US equity market.