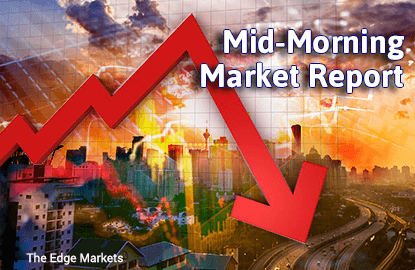 KUALA LUMPUR (April 26): The FBM KLCI fell 0.62% at mid-morning in line with the weaker regional markets, extending its consolidation.

Asian stocks were on the defensive on Tuesday after oil prices eased and as investors braced for central bank policy meetings in the United States and Japan later this week, according to Reuters.

MSCI's broadest index of Asia-Pacific shares outside Japan was down 0.1%, while Japan's Nikkei slipped 0.4%, it said.

Hong Leong IB Research said that today, it was of the view that that the FBM KLCI remains lacklustre ahead of the Federal Open Market Committee meeting on April 26-27 and narrowing Bollinger band which suggests that ranges are small and there is low volatility in the local market.

"As global markets are entering into May, market investors may stay cautious over the old saying 'Sell in May and Go Away' adage," it said.