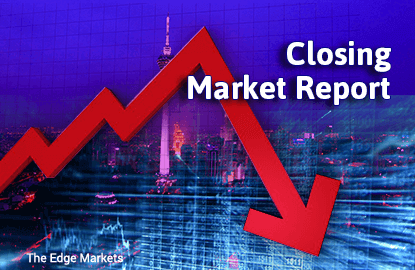 "It (China) has become a potential spoiler for any positive momentum building in this region. It can be anything (bad news from China): from its currency's drop to its markets," Pong said.

The overarching story of a slowdown in the world's second largest economy was extended to its corporate sector, as Pong said investors were concerned of the earnings prospects going forward.

Reuters reported that Shanghai stocks had their worst performance in eight weeks on Wednesday, tumbling more than 2% and breaching a key technical support level as investors who are increasingly worried about the economy took profits from a long rally.

In Malaysia, Pong said the conundrum of crude oil prices' fall also cast a dark cloud over Bursa Malaysia. But with the ringgit continuing to strengthen today, he said such sentiment caused many export-oriented stocks to lose more flavour.

Brent crude oil futures fell 94 cents to US$43.09 a barrel at 0830 GMT after Kuwaiti workers ended a three-day strike. The ringgit strengthened 0.5% against the US dollar to close at 3.8667.

"Some of the small caps with biggest earnings growth last year happened because of the weaker ringgit. The enthusiasm might have ebbed," Pong said.