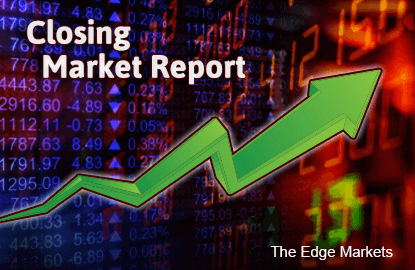 Reuters reported that Asian stocks rose on Thursday as a sharp rebound on Wall Street eased fears of a protracted global market rout, while the dollar steadied as risk appetite returned.

Sentiment was also supported by comments from New York Fed President William Dudley on Wednesday who said the prospect of a September rate hike "seems less compelling" than it was only weeks ago given the threat posed to the US economy by recent market turmoil.

“The KLCI is up in line with external markets, which is cautiously rebounding in the past few days. There’s currency play at work — the ringgit has weakened a fair bit against the US dollar, but the serious deterioration is subsiding,” Soo said.

The ringgit strengthened to 4.2318 against the US dollar and compared to the Singapore dollar, the ringgit appreciated to 3.0213.

Anticipation of a later-than-expected US interest rate hike could have supported Asian currencies today.

The most-active stock was AirAsia Bhd.