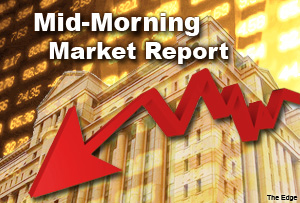 KUALA LUMPUR (Nov 11): The FBM KLCI edged lower at mid-morning in line with the regional markets that got off to weaker start despite the firm overnight closing at Wall Street and European markets.

Regionally, Asian shares and the dollar got off to a lacklustre start on Tuesday as oil prices continued to drop, while Japanese shares marked early gains.

Crude oil prices shrugged off concerns about conflicts in Libya and Ukraine and continued to sag. Fears about a global supply glut and slowing growth have pushed oil prices down nearly 30 percent since June, it said.

“We expect further consolidation for the local bourse with 1,820 as the immediate support for today,” it said.