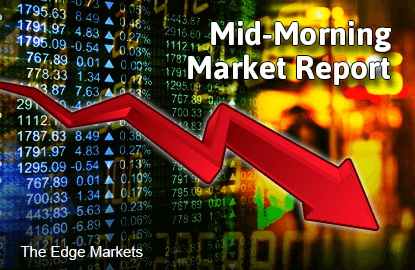 KUALA LUMPUR (Nov 18): The FBM KLCI dipped at mid-morning today in line with the cautious sentiment at most regional markets.

Asian share markets were cautious on Wednesday as another bomb scare in Europe days after the deadly Paris attacks left investors in a contemplative mood, giving a boost to safe-haven U.S. bonds and the dollar, according to Reuters.

The greenback held firm at seven-month highs against a basket of currencies as U.S. economic data also backed up the case for December interest rate hike, it said.

Hong Leong IB Research reiterated its view that unless a decisive breakout above 1674, the FBM KLCI is likely to engage in short term range bound consolidation with key interim support near 1642 (38.2% FR) and immediate resistance at 1674 territory.