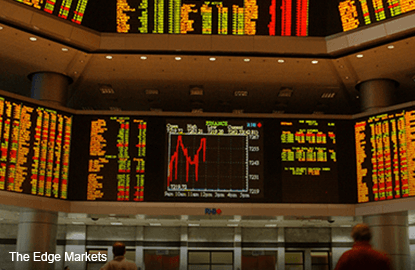 KUALA LUMPUR (Feb 6): The FBM KLCI is expected to extend its gains next week as domestic sentiment improves in post Chinese New Year trade despite the slump at most global markets last Friday.

Global stock markets slumped and the U.S. dollar rallied on Friday after a key U.S. jobs report painted a mixed picture of the labor market and left investors with a muddled view on interest rate hike prospects.

“We must admit that Bursa Malaysia started 2016 with jittery market sentiment, which saw major sectors tumbling heavily in the early part of January due to Chinese fears of its economy slowing down while Crude oil prices dived briefly below USD30/bbl, the lowest in more than a decade and Ringgit depreciated to a new recent low of 4.50 per USD in mid-Jan.

“We however noted that the decline has stabilised and sentiment has recovered.

Nazri, who is also the president of the Malaysian Association of Technical Analysts, said that on the technical front, the FBM KLCI has reduced losses significantly to close flat, after weighed down by persistent sluggish external sentiment, volatile Crude oil prices and China’s economic slowdown.

He said despite the recent workers levy hike by the government, the local sentiment jump led by plantation sector although trading volume looks tepid as the Chinese New Year holiday come.

He said as the FBM KLCI staged a rally above 20 and 50 day moving average, momentum oscillators such as RSI and Stochastic continue trending higher, indicating the increase of buying momentum on the local bourse.

“Overall, we reiterate our view that the local bourse will trend higher on reduced concerns over the slowdown in China, absence of interest rate hike and rising crude oil prices.

“With the underlying trends of strengthening Ringgit and Crude oil prices, we sense a good buy investment strategy now especially on emerging trading interest in Plantation and Oil & Gas stocks.