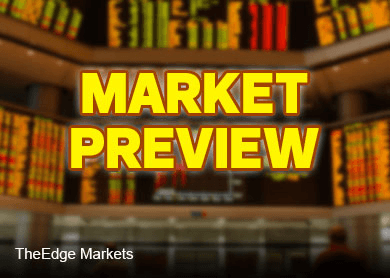 KUALA LUMPUR (May 8): The FBM KLCI could stage a mild rebound today on likely bargain hunting in line with the overnight recovery at Wall Street and most global bond markets.

The global bond market rout slowed on Thursday as long-term borrowing costs retreated from their highest levels in more than five months, helping to stabilise European stocks and kindle a mild recovery on Wall Street, according to Reuters.

The absence of a deal between Greece and its lenders, however, put pressure on the euro and regional stocks, it said.

Investors' rush out of stocks and bonds earlier this week sent major European indexes to their lowest in two months and major U.S. and Japanese gauges to the weakest in a month, said Reuters.

AllianceDBS Research in its evening edition Thursday said that dampened by the settlement below the 50-day MA line in the preceding day, the FBM KLCI had on May 7 traded lower to close at the day’s low of 1,805.10 .12 (- 15.87 , - 0.87%) as market participants continued to play a selling game in anticipation of a lower market.

“In the broader market, losers outnumbered gainers with 437 stocks ending lower and 319 stocks finishing higher. That gave a market breadth of 0.72 indicating the bears were in control,” it said.

AllianceDBS Research said the lower low on May 7 indicated that sellers were still in better control over the buyers.

“During the same periods, the market had registered 6 down closes with only 1 up close. This signified a weak market development.

“Following the weak down close, the benchmark index is expected to test the 1,800 psychological level. A fall below 1,800 could send the market down to the subsequent support at 1,770,” it said.

The research house said the overhead resistance was at 1,830.

“The analysis of overall market action on May 7 revealed that buying power was weaker than selling pressure.

“As such, the FBM KLCI would likely trade below the 1,805.10 level on May 8,” said AllianceDBS Research.