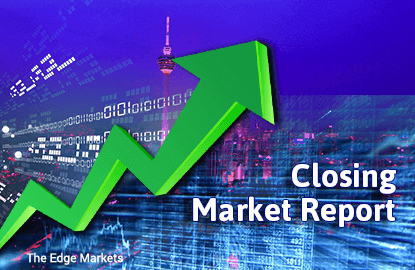 KUALA LUMPUR (Feb 2): The FBM KLCI gained 1.94 points or 0.12% today on the back of better liquidity breadth compared to the sluggish trade last Tuesday, a day before the Federal Territories Day holiday yesterday.

The KLCI settled at 1,673.48 points, driven by climbs by stocks from the plantations, technology, and consumer products sectors.

"The breadth continues to be positive with strong volume, though the region is down. Today, we are catching up with yesterday's game because (Bursa) Malaysia was closed yesterday and the blue chips are the gainers," said Interpacific Research's head of research Pong Teng Siew.

Pong added that actively traded stocks which are strongly positive have also helped the benchmark index play catch up.

Across Bursa, a total of 1.82 billion shares worth RM2.31 billion changed hands. There were 537 gainers versus 315 decliners, while 339 counters closed unchanged.

The ringgit, meanwhile, strengthened to 4.4250 against the greenback at 5pm.

Reuters reported that Nikkei shares, on average, fell on Thursday to its lowest in more than a week after a stronger yen soured sentiment, while Toyota Motor Corp underperformed after posting weak monthly sales in the US.

In Hong Kong, it said stocks fell, with property counters leading the slide, as investors continued to lock in gains after the US Federal Reserve stuck to its mildly upbeat economic view but gave no hint of when it would next raise interest rates.