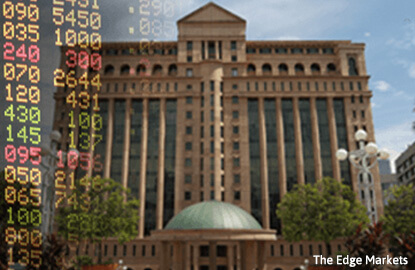 KUALA LUMPUR (July 15): The FBM KLCI is anticipated to claw higher next week, on the back several positive local and international developments.

“We note that the big focus in the markets was the shift in expectations that U.S. interest rates could rise slower than had been previously expected. due to impacts of Britain ending its EU membership,” he said in a note today.

Nazri, who is also president of the Malaysian Association of Technical Analysts, said the local bourse should be catalysed by Bank Negara's surprised decision to reduce its Overnight Policy Rate (OPR) to 3%, from 3.25%, during its Monetary Policy Committee meeting.

He said Bursa Malaysia FBM KLCI should be bullish in the wake of Bank Negara's mild surprise, although the broad market is slow to react.

“We see the OPR cut as pre-emptive move to ensure that inflation remains under control, and the economy remains on a steady growth path.

“This is confirmed by Malaysian bonds three-year yield which dropped to its lowest level since 2009, and stronger ringgit which hits 10-week high versus greenback,” he said.

Meanwhile, Nazri said sentiment should also be encouraged by positive local macro data from the Industrial Production Index (IPI), which grew 2.7% year-on-year (y-o-y) in May, performing better than market expectations.

He said manufacturing production, which has a close to two-thirds weight in the IPI, expanded at a faster rate of 3.6% y-o-y, after slowing to an 18-month low of 3.3% y-o-y in April.

He said on the chart, the FBM KLCI had broken out from its consolidation zone and is still looking to test the 1,680 immediate resistance.

Nazri said on top of the positive performance of the oscillators i.e., MACD histogram, the RSI and Stochastic, momentum is expected to rise over the near term.

“Average daily trading volume, however, was thinner that what the bulls would have liked, but still remains healthy, which is 1.7 billion shares, worth RM1.9 billion.

“Overall, given the buoyant mood coming from global markets, as well as positive catalyst coming from the domestic front, we reckon that the FBM KLCI could be poised to trend upward this week, to break out from its consolidation zone,” he said.

“Given the positive technicals, we continue to believe the index is ready to bounce and could stage further strength, if ringgit and commodities continue to strengthen.