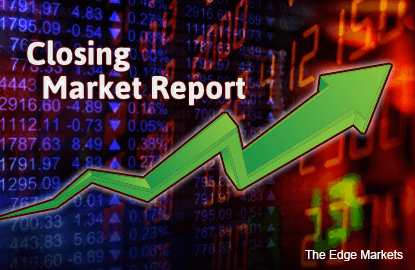 KUALA LUMPUR (March 17): At the end of trading hours today, the FBM KLCI closed 9.76 points or 0.58% higher at 1,703.19, as investors took their cue from the US Federal Reserve (Fed)'s decision to maintain the target range interest of federal funds at 0.25% to 0.5% at the recently concluded Federal Open Market Committee meeting.

TA Securities senior technical analyst Stephen Soo said the market's performance can be attributed to the positive news flow following the Fed's meeting, as well as the recovery in oil prices.

"The Fed's decision to maintain interest rates, and the fact that it is now expecting to raise rates twice this year as opposed to four times as reported earlier, seems to have augured well with investors.

"Brent crude futures, which have inched higher to US$40 per barrel on reports that the Organization of the Petroleum Exporting Countries will be meeting next month to discuss a potential freeze output, has also added to the positive sentiment in the market," he told theedgemarkets.com when contacted.

He added that the recent statement by China's Premier Li Keqiang that it was impossible for the world's second largest economy not to reach its economic targets was also another factor driving up markets.

Following the bout of positivity today, the ringgit strengthened to 4.0563 against the greenback, from 4.1363 yesterday.

Against the Singapore dollar, the ringgit was also stronger at 2.9882, compared to its close of 2.9971 yesterday.

The local bourse today saw a total of 1.81 billion shares, valued at RM2.31 billion, traded. There were 490 gainers against 341 losers, while 360 counters were unchanged.

Reuters reported that Asian shares gained across the board today as risk appetite revived after the Fed reduced the number of interest rate hikes expected this year, while the dollar nursed substantial losses.

"Asian equities took their cue from Wall Street, where the S&P 500 closed at its highest level this year following the US central bank's cautious message," said the newswire.