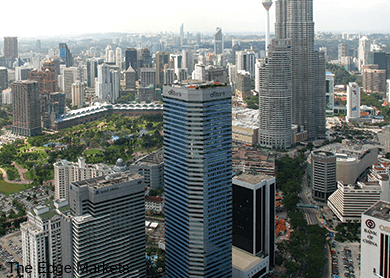 KUALA LUMPUR: The average office market vacancy rate in Kuala Lumpur was at 12.8% in the fourth quarter of 2014 (4Q14), a decrease from 15.6% year-on-year (y-o-y) due to higher domestic demand, according to Jones Lang Lasalle Property Services Malaysia Sdn Bhd’s (JLL Malaysia) property market monitor for January 2015.

“[As for the office] rental market, the average rental rate is stable as most of the supply comes after 2Q15, vacancy is expected to marginally increase due to more office lettable area supply,” JLL Malaysia country head YY Lau told The Edge Financial Daily.

According to JLL Malaysia, a total of two million sq ft of Grade A office space is expected to be completed by 2015 within Kuala Lumpur.

All the developments are located within the Kuala Lumpur City Centre vicinity.