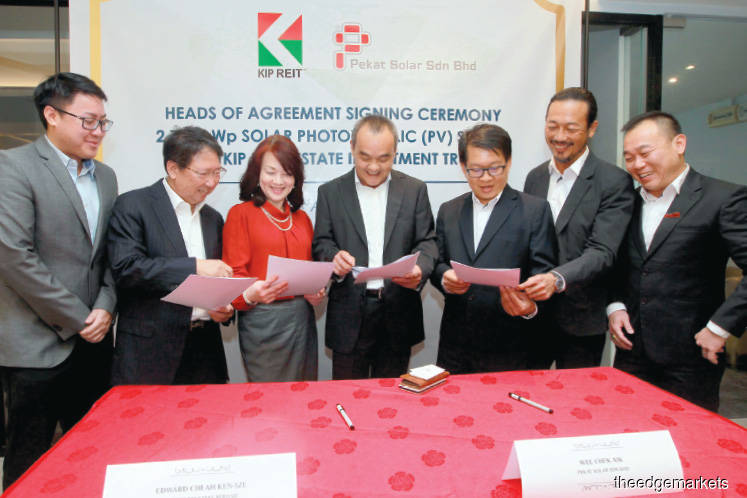 However, he stressed that nothing is firm yet.

Chew explained that the REIT will be exploring options to increase its revenue stream from other sectors, as well as to diversify risks.

“We intend to be still relevant to our business sector — the retail sector — as we understand our sector best and will be more comfortable. We are still just exploring. We are very cautious as the uncertainty is still there,” he told a press conference yesterday.

Going forward, in a bid to boost its total assets under management (AUM) to RM2 billion, the REIT is planning to purchase an asset in Kota Warisan, Sepang, for which it has the first right of refusal up to financial year ending June 30, 2019 (FY19), from its promoter KIP Group of Companies.

Chew explained that the purchase will only be made if the asset’s occupancy rate reaches 85%, from 70% currently. “85% [occupancy rate] will provide a more steady income stream,” he added.

Additionally, KIP REIT which targets the mass market, is looking to acquire other assets in suburban areas to avoid competition in the city.

“We still have some pipeline projects. If the yield is okay, we will inject into the REIT. We are on the lookout for acquisitions. Probably with our pipeline, we will do over RM1 billion [of our total AUM], but we are still looking for quality acquisitions,” said Chew.

He added that the REIT has a total occupancy rate of about 88% and expects it to gradually increase.

Meanwhile, Chew explained that unlike shopping malls, the REIT’s rental renewals are short- to mid-term. With about 1,000 tenants, Chew said the REIT is looking at a rental reversion of about 2% to 3% per year.

Chew said KIP REIT will now be focusing on assessing its tenant mix for it to be reflective of the current market demand.

Yesterday, the REIT announced its partnership with Pekat Solar Sdn Bhd for a 25-year green initiative through the installation of photovoltaic (PV) systems on six of KIP REIT’s assets for a total of 2,730 kilowatts of solar PV systems, which will cost about RM9.56 million.

The initiative will be jointly owned by KIP REIT and Pekat on an 80:20 basis, whereby KIP REIT will be funding RM7.64 million via bank borrowings. This will then increase the REIT’s gearing to 16% from about 14% currently.

With a target to complete the installation in five months, Chew said the REIT would be able to save a total of RM26.4 million worth of electricity cost, which leads to an increase in its net property income (NPI).

In a filing with Bursa Malaysia yesterday, KIP REIT also declared a third interim distribution per unit of 1.78 sen, amounting to RM8.99 million, for FY18, payable on May 25.

“This quarter’s results is very important to us as it gives us a full 12 months of financial track record to prove ourselves. We are proud to say that we have exceeded expectations with our exemplary performance which allowed us to distribute 6.95 sen per unit for the past 12 months,” said Chew in a separate statement.