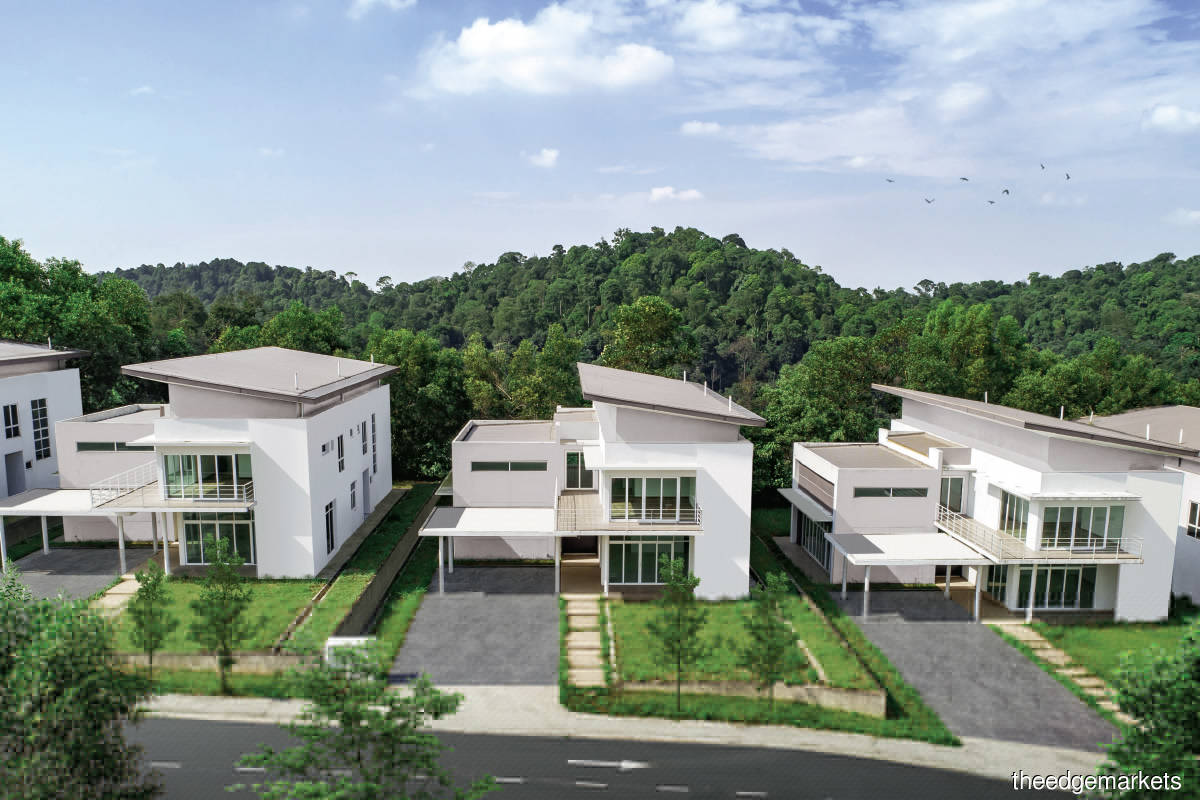 Kimlun Land Sdn Bhd, the property arm of construction company Kimlun Corp Bhd, is launching its second phase of bungalows within the 59.3-acre leasehold Bukit Bayu project in Seksyen U10, Shah Alam, Selangor, in June. The properties are individually titled and located in the low-density, gated and guarded develop­ment.

With a gross development value of RM90 million, Phase 2 will comprise 39 bungalows that will be launched in two phases. The first, Phase 2A, will offer 16 two-storey bungalows with built-ups ranging from 5,825 to 5,971 sq ft and land sizes of 7,578 to 11,173 sq ft. Unit layouts will offer 6+1 rooms, six bathrooms and a powder room, and the indicative selling prices are RM2.2 million to RM2.7 million.

Its earlier phase (Phase 1) comprises 30 two-storey bungalows that Kimlun Land acquired,  along with 47 vacant lots, from Melati Ehsan Holdings Bhd in 2018. The 30 units in Phase 1 were refurbished by Kimlun Land and has achieved an 80% take-up rate since their launch in January last year. There are 36 other existing bungalows in the Bukit Bayu enclave.

Kimlun Group executive director Pang Khang Hau tells City & Country about the opportunities he sees in the project and the enhancements the company has made to the development. “When we visited the site, we saw potential, as it is next to the Bukit Cerakah forest reserve. The previous developer had already built bungalows and the other part was vacant land.

“For the bungalows, we got an architect to enhance the buildings in terms of its façade and finishes … and made alterations to the buildings’ dimensions as well as adjusted the wet kitchen layout. There was nothing wrong with the houses previously, but we made some improvements to keep up with the times.

“A landscaped area that was quite bare and a clubhouse area gave us an opportunity to work on the ‘living defined by nature’ concept, which is the whole idea behind Bukit Bayu. Here, families can roam around freely and safely, and live within nature and in a close community where they know their neighbours.” Units in Phase 2A will be similar to the more popular Type B layout in Phase 1, says Pang. The homes will feature a double-volume foyer, open-plan design and high ceilings.

Besides giving the Phase 1 bungalows a facelift, Kimlun Land has  built a new clubhouse known as The Fins, redesigned the landscaping and rebuilt the ecosystem of the wetlands and park in the development by planting more trees and greens, says Pang. “We have planted a lot of indigenous trees and aquatic plants in the wetlands. As we wanted to rebuild the ecosystem, we hired a wetlands specialist to help us redesign the whole place. We eventually succeeded in attracting butterflies, birds and dragonflies to return.”

Pang says, in the early stages of the project, the company also spoke to the Malaysian Nature Society. “They told us that dragonflies appear only when the water is clean. I believe what we’ve done has really made an impact on the whole environment,” he enthuses.

So far, 926 trees have been planted by Dragonfly Lake, and 70% of them are indigenous. “We will continue to [plant more trees] to make the place lusher,” Pang says. He notes that 7.8 acres of the development will be used for green spaces, of which 10,143 sq m is the wetlands and park.

The clubhouse, which comprises two decks, has a gym, swimming pool, playground and barbeque area as well as a yoga deck/cardio gym on the upper deck, and an edible herb garden, children’s wading pool and multipurpose hall. Residents also have the use of jogging tracks, an elevated walkway, a feature stone stairway, timber bridge and hidden tracks within the development. Dragonfly Lake is part of the 7.8 acres reserved for green spaces in Bukit Bayu

According to Pang, the monthly maintenance charge is currently RM600 per house for Phase 1. He notes that the common spaces are kept as natural as possible so that less maintenance is needed.

Foundation works for Phase 2A have started and the homes are estimated to be completed by 4Q2023.

As for Phase 2B, the developer plans to put the 23 bungalows up for sale in 3Q2021. According to Pang, Phase 2B units will offer a smaller built-up than the previous phases to give owners the flexibility of using the space to plan extensions.

“The feedback we got in Phase 1 was that there wasn’t much room to do extensions or for a pool. So, for Phase 2B, we are looking at a more flexible layout with smaller built-ups to cater for future extensions,” he says.

The company has tentative plans for an additional 57 units after Phase 2B, and the entire Bukit Bayu development will take four to five years to complete, depending on the market, says Pang.

Slated for completion by year-end, DASH is a main highlight of Bukit Bayu. “We also have buyers from Subang, Bandar Utama and Petaling Jaya, mainly because DASH will shorten the travel distance and it will take them only 10 to 15 minutes to reach the development.

“Also, compared with similar properties in those areas, our prices are comparatively lower and thus ideal for families looking to upgrade to a bigger home with a safe environment, close community and nature living.” Dining area of a Phase 1 Type B show unit

Projects then and now

With its construction roots tracing back to 1977, Kimlun Group ventured into the property development business about a decade ago. “As we have been doing many jobs for developers, we’ve decided to capitalise on our expertise and go into property development. We also have expertise in the Industrialised Building System, which we are bringing into Kimlun Land as well,” says Pang.

Its first project, 804-unit Hyve in Cyberjaya, is a RM230 million, mixed-use development joint venture launched at end-2012. This was followed by a RM48 million 2-storey link house development in Taman Puteri in Pekan Nenas, Johor, comprising 131 units that was launched in 2014. Both develop­ments are 96% sold.

An upcoming project is the RM60 million Hundred Trees Private Estate development in Bandar Seri Alam, Johor Baru. Comprising 60 semi-detached units, it will have a concept similar to Bukit Bayu. “We will also be bringing nature into the development and emphasising a lot on creating a family-friendly, close community environment.

“We still have landbank, mainly in Johor Baru. We’re just waiting for the right time to launch. Currently, Bukit Bayu will be our focus, as we believe it will contribute to our brand identity,” Pang says.