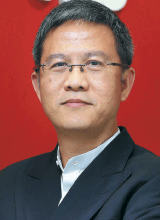 Khind Holdings Bhd is optimistic that sales will pick up in its electrical home appliance business, which was hit last year by a slowdown in consumer spending.

“We are targeting double-digit growth and our prospects for this year are bright,” says group CEO Cheng Ping Keat, adding that the company is anticipating better demand in the local and overseas markets.

“We saw a revenue decline in the local market last year. This year, we aim to recover our lost sales and we will push for greater exports.”

Despite weaker earnings in the financial year ended Dec 31, 2014 (FY2014), Cheng is confident that demand will recover, especially after the implementation of the Goods and Services Tax (GST) in April. He says the company is aiming for a 10% to 15% revenue growth this year.

Cheng says the lower profit in FY2014 was largely due to a decline in domestic sales as its dealers turned cautious and held back from replenishing their orders.

However, he feels that the chances of recovery are high as orders should return to normal because dealers’ stock levels should be low at this point.

Khind manufactures and distributes electrical home appliances for the domestic and export markets, and is well known as the market leader in fans in Malaysia with an estimated 25% share. Its brands include Khind, Mistral, Honeywell and Ariston.

According to Cheng, Khind’s overseas sales rose last year and largely cushioned the impact of the fall in domestic sales on its revenue.

“The challenges that we face are short term in nature. The depreciation of the ringgit has definitely been a boost to our export business, making Malaysian-made products more competitive,” he says, adding that Singapore and the Middle East are the company’s two largest export markets.

“Our growth potential is in the Middle East and Africa. Our fans and rechargeable lamps are well accepted in West Africa,” Cheng says.

“In the next few years, we will focus on sales and profit growth. I think it’s time for us to be more aggressive. You can expect us to introduce more new products and promotions and put more effort into penetrating new markets.”

Besides its core business, Khind also has an industrial electrical segment, which it ventured into in 2011. The division contributes about 15% to its total turnover.

According to Cheng, Khind’s key strengths include its strong brand name and distribution network. It was founded in 1961 and listed on Bursa Malaysia in 1998.

“It is a common misconception that Khind is competing in the low-cost segment. We are not a low-cost player competing with low-cost Chinese electrical home appliances. We are in the mid-priced segment providing quality products at affordable prices,” he stresses.

The company adds 50 to 80 new products annually and currently has 400 to 500 products in the market.

“We continually invest in branding and are currently tapping into the e-commerce and digital marketing trend via our online portal, www.khindonline.com, and other online portals,” Cheng says.

Although Khind’s online business is small compared with its bricks-and-mortar business, it has grown exponentially since it was set up in 2012, from RM6,000 in annual sales to more than RM800,000 in 2014.