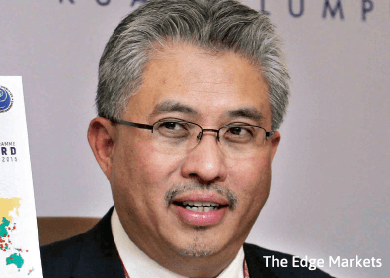 KUALA LUMPUR (Oct 5): Khazanah Nasional Bhd is "not in a rush" to sell its 30% stake in Bank Muamalat Malaysia Bhd, under the proposed merger with Malaysia Building Society Bhd (MBSB).

"We have a policy that if it's not a core holding, we don't really need to hold (it). We are not in a rush to sell either.

"It has to be at the right price, right configuration and so on," Azman told reporters, on the sidelines of Khazanah's Megatrends Forum 2015.

According to Azman, as Khazanah is only a 30% shareholder in Bank Muamalat, Khazanah is not taking the lead in the merger talks.

Azman's comments followed Bank Negara's approval for MBSB to start talks with DRB-Hicom and Khazanah on the merger.

"We have seen some progress in Bank Muamalat, but really, our partners DRB-Hicom and MBSB, which is owned by the EPF (Employees Provident Fund), are taking the lead. Khazanah will make a decision based on whatever they decide," he said.

MBSB's merger with Bank Muamalat is expected to create a financial sevices entity with a collective asset size of some RM60 billion.