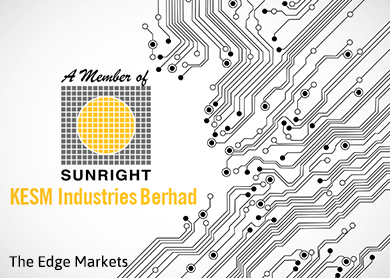 KUALA LUMPUR (Jan 14): KESM Industries Bhd (KESM) has earmarked about RM82 million for its financial year ending July 31, 2016 (FY16) to expand the capacity of its integrated circuits test segment to meet the requirements of its clients from the automotive semiconductor manufacturing industry.

KESM provides specialised electronic manufacturing activities, primarily the provision of burn-in services — the process of stressing semiconductors to weed out potentially weak circuits — with a focus on the automotive market.

KESM's executive director Kenneth Tan said the quantum of allocated capital expenditure for FY16 is the same to that which it spent in FY15.

“The capacity expansion will mainly come from the test area. There are test requirements that need us to continue to invest in testing, in order to support our customer’s requirements. These are all customer-driven capacity requirements,” Tan told reporters, after the company’s annual general meeting (AGM) today.

Between 2011 and 2015, KESM, which is an associate company of Singapore-listed Sunright Ltd, had spent RM295 million on capex.

According to Tan, KESM is on track to grow its test segment, after acquiring the remaining 34.62% stake not owned by the company in KESM Test (M) Sdn Bhd, from Sunbright Ltd.

As such, Tan is optimistic about the company’s performance in FY16, as it expects to leverage on the growing global automotive industry that is moving towards the use of more electronic content in the vehicle, especially as the industry readies itself for the much-vaunted driverless cars.

Tan said many car makers have laid out their respective roadmap to get the driverless car on to the road in 10-15 years, and KESM can leverage on that trend to grow its business further.

“The future of the business is bright. We’ve already build up this investment in test, and as we scale up our operation to address the headwinds, we can also capture the future now,” Tan added.

Tan expects that 15 years from now, the electrical content in a driverless car will be double the amount of today’s conventional car.

Tan also said the focus is now on growing the company organically, and hence, merger and acquisition is not on its agenda.