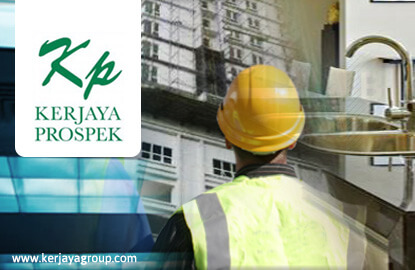 KUALA LUMPUR (Feb 27): Kerjaya Prospek Group Bhd has posted a fivefold increase in net profit for the fourth quarter ended Dec 31, 2016 (4QFY16) after consolidating results from two subsidiaries that were acquired in January 2016.

The construction and property development firm's net profit rose to RM26.22 million from RM4.76 million in 4QFY15, while revenue swelled by more than 11 times at RM235.49 million from RM18.6 million.

"The outstanding performance, especially in the construction segment, has mitigated the slowdown in the manufacturing segment (after) completion of existing projects and market competition," Kerjaya Prospek said in a filing with Bursa Malaysia today.

The group said one of the two subsidiaries acquired, Kerjaya Prospek (M) Sdn Bhd, had contributed about RM733 million in external revenue from its ongoing projects, while a land reclamation project recognised its first revenue of about RM8 million.

Meanwhile, the manufacturing segment saw a decrease in its revenue to RM10.08 million from RM13.75 million in FY15 and drop in segmental profit by some RM740,000 as the weakening ringgit caused a hike in the material price, it said.

Kerjaya Prospek had also seen the launch of its maiden development project in January 2016, resulting in a revenue of RM32 million and profit of RM8.25 million for its property development segment.

The Vista Residences @ Genting Highlands has seen a take-up rate of 61% and is at 55% of construction stage, the group said.

Going forward, Kerjaya Prospek said it is better equipped to participate in the tendering of larger scale projects and further gain access to a wider pool of well-established developers following its acquisitions in January 2016.

"Despite the group's objective to expand its core business in construction, it will maintain the manufacturing segment as part of its integrated and complimentary business to the construction segment and continue its property development projects," the group said.

At the end of the morning trading session, shares in Kerjaya Prospek were up 2 sen at RM2.50 with 570,400 shares traded, giving the group a market capitalisation of RM1.28 billion.