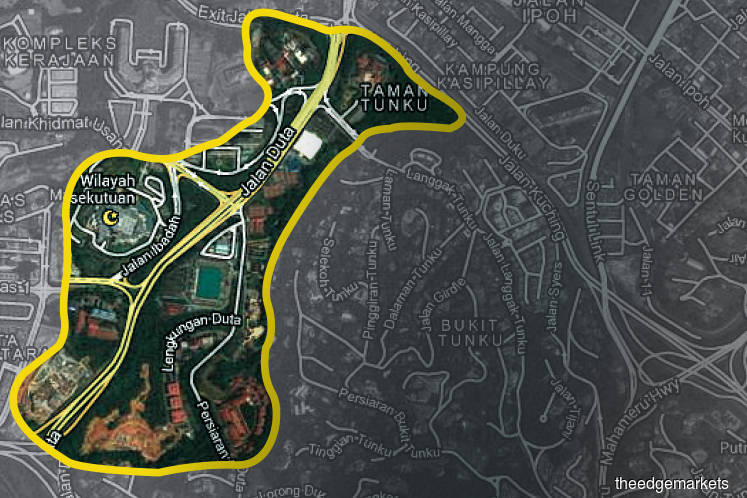 KUALA LUMPUR: Kenari Maluri Sdn Bhd — a company which claims to represent the majority of Semantan Estates (1952) Sdn Bhd’s shareholders — has applied to intervene in the company’s judicial review application against the government, claiming that it wants to provide a win-win solution to a pre-Merdeka land dispute over a large tract of prime land in the former Jalan Duta here.

When met at the High Court here by theedgemarkets.com, lawyers Datuk Edward Ng Boon Siong and Jason Ng Kau said they represent Kenari Maluri, which is purportedly friendly to both the plaintiff and the defendants — namely the government and six of its agencies.

“We want to reach a global settlement to end the tussle once and for all as we feel there is no point for the liquidators to fight against the government,” said Boon Siong.

“Kenari Maluri, representing the majority in principle, wants to give a proposal to settle the long-standing dispute out of court. As a result, the High Court here has fixed July 8 to hear its application to be an intervener, so that it can be part of the respondent,” he added.

Kenari Maluri group director and chairman Datuk Tun Hasnul Azam Tun Hamzah, who was also present, said that his company officially represents 55% of the shareholders and wants to see an end to the decades-long court battle, which was triggered by a compensation dispute between Semantan Estates and the government over the compulsory acquisition of a 263.27-acre (106.54ha) parcel of land along Jalan Tuanku Abdul Halim in the 1950s to develop a diplomatic enclave.

The neighbourhood did not come to fruition, but it became the namesake of the main artery into the city.

Semantan Estates had filed a judicial review to retain beneficial interests and cause to transfer the ownership of the land, with a hearing before Justice Nordin set for Aug 15 after Semantan Estates obtained leave last May 13.

In its judicial review application filed in February 2017, Semantan Estates named the Malaysian government, the Federal Lands Commissioner, the minister charged with the responsibility for land in the federal territory, the natural resources and environment minister, the director-general of the Department of Lands and Mines, the director of lands and mines (federal territory) and the Federal Territory Registrar of Titles as respondents.

Semantan Estates sought a court order for a mandamus to compel the respondents to:

1. Transfer and cause to be transferred the 263.27-acre land in Mukim Batu to Semantan Estates, free of encumbrances and liabilities;

2. Execute and cause to execute to effect the transfer of the said land and;

3. Issue and cause to issue the document title of the said land to Semantan Estates.

Besides this, the company also sought for:

1. The preparation, change, cancellation, deletion, correction or amendment of the registrar document of the land title and to register proprietorship of the said land for Semantan Estates, and;

2. Returning and making arrangements in respect of returning and handing over the possession of the land to Semantan Estates, which is recognised as the lawful proprietor and owner of the land.

The judicial review application was filed on the grounds that the respondents had failed, neglected, omitted and refused to comply with Semantan Estates’ demand to give effect to the court order stated above.

In 2009, then High Court judge Zura Yahya ruled that Semantan Estates retained beneficial interests in the 263.27-acre land in Mukim Batu, which the government had taken unlawful possession of, meaning it had trespassed on the said land. This decision was upheld by the Court of Appeal and the Federal Court.

On Nov 22 last year, the apex court led by Court of Appeal president Tan Sri Ahmad Maarop dismissed a review made by the Malaysian government, six years after the initial Federal Court decision was made.