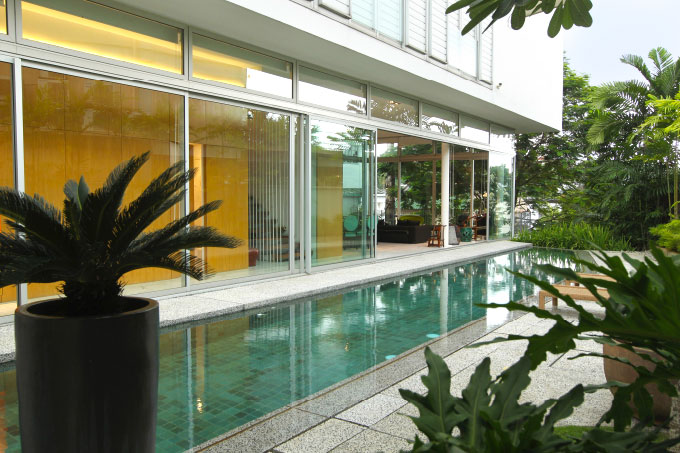 “IF you want to move country, and your luck is anything like ours, buy a house,” says Corinne Lee, matter-of-factly.

Each time Corinne and her husband, Antony Lee, CEO of AIG Malaysia, bought a house and started to build their dream home, there would be a move due to his work or circumstance. While living in London with a young child, they had just finished renovations on their house when they received news of the death of Antony’s father. They decided to move back to Malaysia to be closer to his mother. Then, when they had just finished work on their home here, Antony received a job opportunity in Singapore, and later, Vietnam.

Last December, the couple and their two young sons, Oscar and Zachary, finally moved into the Damansara Heights home, 12 years after purchasing the property and seven years after completing the rebuilding work.

Truly, the timeline is epic, but the house in essence boasts a very simple design. Antony describes the design theme as “a concrete box sitting on a glass box” while Corinne calls it “a Toyota showroom” — all in jest, of course.

The house has a very lived-in feel. Even when they were living abroad, the Lees had made an effort to furnish it — even if sparingly — and stayed there when they were in town visiting Antony’s mother.

The garden is flourishing, right down to the slopes on which the house sits. The poolside is immaculate: a serene space with a meditating Buddha is at one end, and at the other, a plot of planters where Corinne and the gardener are experimenting to find out what can survive in the semi-rocky plot.

What strikes the visitor is the fact that the front door opens to the kitchen. It’s a modern kitchen with an island, beautifully complemented with a vintage ebony-hued dining table with a mixture of chairs and benches. Here is the heart of the home, the “focal point”, as Antony calls it, because “that’s where everybody is always”, and where the lady of the house spends most of her time. 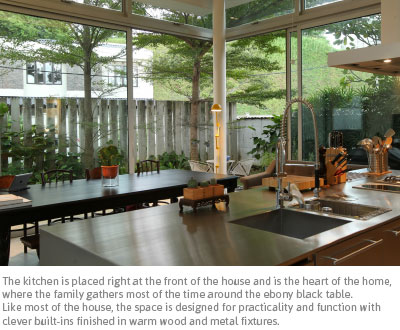 It was Antony who designed the house while Corinne was in charge of space planning and acted as project manager. “If it were up to me, this house would’ve been twice its size,” she jokes, but one can observe through the self-deprecating humour the pride of ownership in her eyes. “I wasn’t such a big personality then and I had yet to accumulate my rather large wardrobe. Now, it [personality] fills the house, right?” she adds.

Antony is the concept guy while Corinne is the one with the eye for details. She says, “He does a charcoal drawing and says, I want this. While I have to go and fit in toilets. It’s always been a struggle because he’s always adamant about how he wants something to look, although it defies practicality. So we have weird tiny bathrooms and no wardrobe space.”

She jests. In terms of management and organisation, the house offers utilitarian solutions, yet, in the late afternoon, chilling on the large sofa or the Eames lounge chair and ottoman in the living room, one gets that relaxing, resort-like vibe, especially with the soft rustling of the palm fronds in the garden and the breeze coming through the open sliding doors.

There is an ease with which modern design blends in with family antiques. The Lees are trained architects with a love for good design and have found a way to match favourite modern pieces with family heirlooms.

Upstairs, the master bedroom is one of the best areas in the house, with the balcony affording great views of the valley — albeit of other people’s houses — beyond the backyard. “My favourite room,” says Corinne. Inspired by a trip to Tokyo, the couple’s bed sits on a tatami platform and the sliding doors of the wardrobe are covered with Osborne & Little wallpaper featuring cranes and other Zen-like scenes.

Like the rest of the house, the room sees modern pieces juxtaposed with vintage Asian elements, including three of a six-piece Chinese carved wooden screen, also a family heirloom. It separates two Chinese cabinets that Corinne has converted into her shoe cupboards.

Down the corridor are the children’s bedrooms and a guest bedroom, each with en suite bathrooms and built-in wardrobe solutions. There are overhangs for ventilation in each room.

Corinne had the challenge of coming up with storage solutions that would fit in with her husband’s vision. “Very hard to work for him,” she quips. In the end, she came up with wardrobes that doubled as screens to break up the expanse of her sons’ rooms.

Some of the challenges the couple faced in getting their dream home completed was in the construction. Corinne, a Singaporean, had to deal with the language barrier and the workers’ lack of training.

“I brought in all these taps from my dealers in England because they cost a fraction of the price, a third, if we were to buy them here. We had them shipped here. When we built the house 10 years ago, no one knew how to install them,” she relates.

In the end, she rolled up her sleeves and installed the taps, and even the toilet bowls, herself. “After they tried to fix the first one, they destroyed this,” she says, gesturing to the powder room on the ground floor, “I knew I had to step in. I felt so bad asking the contractor to reimburse us for the RM4,000 tap when he would probably have fired the guy who tried to install it. You just do it yourself, lah. It was an adventure, so now I can install taps.”

Antony says, “For me, design’s very important. People tend to overlook a lot of elements — most of the houses here have been designed to be fully air-conditioned. At some point, it’s going to be ridiculously costly to run the air-conditioners 24/7.

“I wanted as much of a column-free space as possible,” he adds.

Over time, there have been a lot of readjustments and improvisation. One of the more recent surprises was the grand dining room table — an heirloom that has been in storage for years. It belonged to Antony’s grandfather, MCA founder Tun H S Lee, who used it when discussing the nation’s independence in the 1950s.

Antony was the lucky one to get the table because his was the only dining room that was wide enough for it. This wasn’t the only piece he’d chosen from the warehouse that stores the family’s heirlooms — there are a few chairs, one of which sits beautifully on the second-floor landing underneath a painting done by Antony, back when he wanted to be a fine artist.

The house is in essence a very simple one but the elements make it special home. Both the ground floor and part of the top floor have wall-to-wall, floor-to-ceiling sliding glass doors, so it is not surprising that glass made up at least one-third of the building costs. “Less paint, but fewer walls to hang pictures,” quips Antony.

Not to say that this home is devoid of art. Above the couple’s bed is a Yusof Majid piece, while downstairs are a couple of oil paintings. However, the Lees do have a healthy collection, including some pieces that Corinne inherited from her grandfather, but due to the lack of walls and the large amount of sunlight streaming in — which will bleach the works — they only have a select few on display.

Corinne is immaculate. Using a special software, she actually has every piece of furniture catalogued in her computer. There’s a drawing of every furniture and objet that she incorporates into the space planning, in the same way one would create a doll house or a home on life simulation game The Sims. Even to this day, every time any of them buys something new, it gets logged into the computer. The inventory is currently up to 4,000 pieces, including the art.

Like every other homeowner, this house is a work in progress and the couple are discussing putting in an extension. The “where” has been decided but the “when” is still in the works.

The Lees have managed to shape an amazing home of simple elegance but it would also be interesting to see how they are going to extend it. As it is, the home is already an awesome balance of the old and new, with both the man and lady of the house paying tribute to their ancestors while celebrating their own aesthetic influences.

The simple life has never been more chic.

This article first appeared in The Edge haven, on Issue #69 October + November 2014.