Karex looking to purchase two pieces of land for RM14.8m

Karex Bhd
(April 1, RM4.39)
Downgrade to hold with a target price of RM4.57: Karex announced that its wholly-owned subsidiary Karex Industries Sdn Bhd had entered into a sale and purchase agreement with Tropical Produce Company (Pte) Limited for the purchase of two pieces of land measuring approximately 4.6ha for a total cash consideration of RM14.8 million.

This will take three months to complete and it will be financed by the proceeds from a private placement exercise that was completed on March 11, 2015. In March Karex placed out 40.5 million new shares which represent 10% of its paid-up capital.

The company intends to utilise the proceeds of RM158 million mainly for business expansion purposes.

Karex’s existing manufacturing plants in Pontian are currently located on the land to be acquired. Since 2004, the company has been leasing the land and paying an annual rental of approximately RM376,800 for its manufacturing and warehousing operations.

With this land purchase, Karex may also not need to relocate its existing manufacturing facilities to the new plant in Pontian that will be completed by June 2015. This will give Karex more room to increase its capacity to cater to future condom demand.

Funding is not an issue as this purchase will be fully funded using the proceeds from the recent private placement.

We advise investors to stay on the sidelines. The share price has appreciated by 58% since our upgrade on Aug 11, 2014, and we believe that this has already factored in Karex’s strong earnings growth and the stock is now fully valued.

While the company is looking to acquire another company in addition to Global Protection Corp (One Brand), we believe that the positive earnings impact on its bottom line will not be substantial as the target company will most likely be a smallish company with strong growth potential.

Although it is penetrating into new markets via One Brand, material earnings contribution will not filter through so soon as it takes time for Karex to grow its sales in a new market.

We also cut our financial year 2015 (FY15) to FY17 earnings per share forecasts by 7% to 8%, taking into account the dilution effect of the recent private placement. We also tweak our capital expenditure assumption for the proposed land acquisition and switch of capacity expansion from Pontian to Thailand. — CIMB Research, April 1 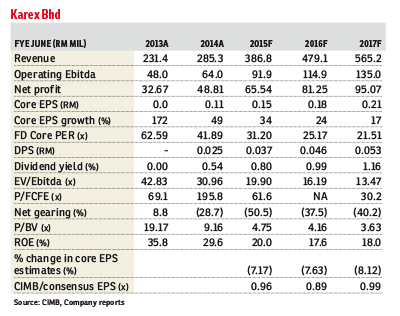