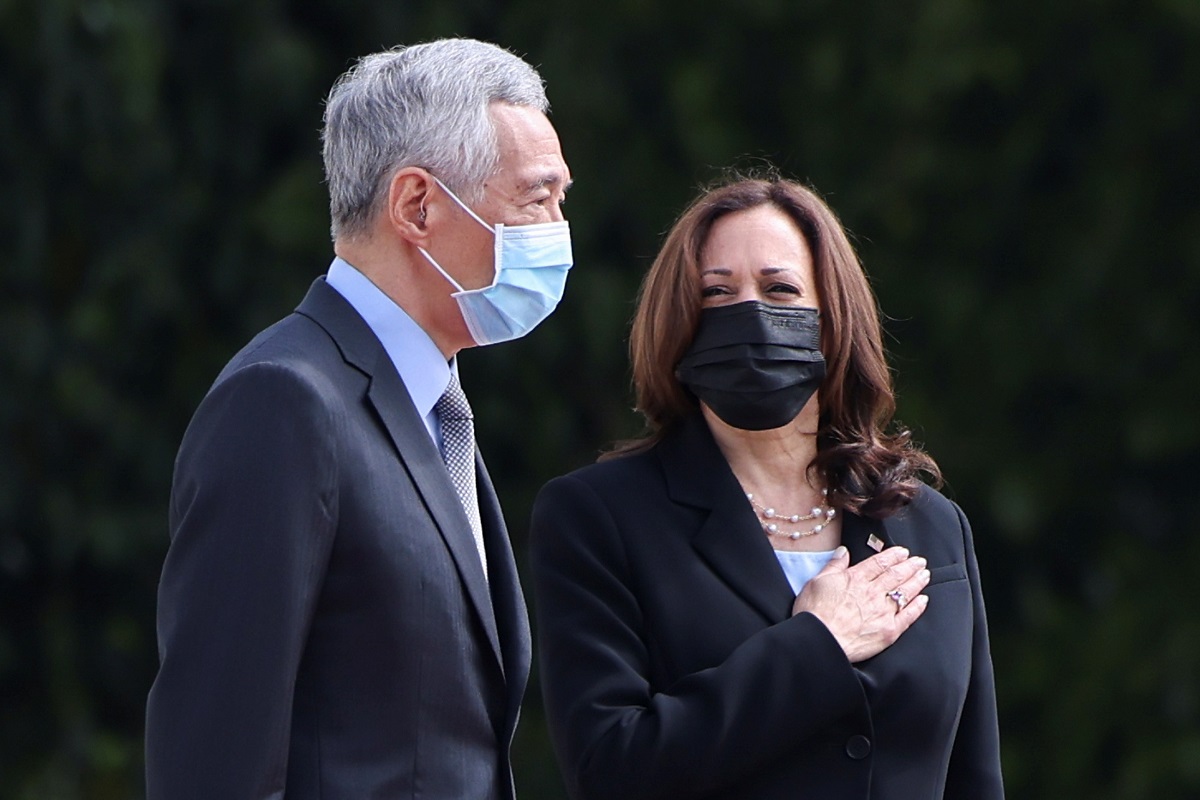 US Vice President Kamala Harris stands next to Singapore's Prime Minister Lee Hsien Loong during a welcome ceremony at the Istana in Singapore Aug 23, 2021. (Photo by Reuters)

During her first full work day in Singapore, Harris and Lee on Monday launched the Partnership for Growth and Innovation, led by the US Department of Commerce and Singapore’s Ministry of Trade and Industry, which will focus on the digital economy, energy and environmental technologies, advanced manufacturing and health care.

The dialogue to boost cooperation on supply-chain resilience will include a panel discussion with American and Singaporean industry leaders and government-to-government conversations.

It’s not clear which industries will participate in the dialogue and by when the countries are seeking outcomes. Harris is scheduled to meet private sector and government leaders in Singapore on Tuesday to discuss the matter.

Before leaving for Southeast Asia, Harris told reporters that she spoke to General Motors Chief Executive Officer Mary Barra and discussed the global chip shortage and US reliance on countries in the Indo-Pacific region for the technology.

The effort to deepen economic ties doesn’t include talks for new trade agreements, one official said. While trade is part of Harris’s conversations in Asia, negotiations for a framework like the Trans-Pacific Partnership or even a digital trade agreement aren’t on her agenda, the official added.

Harris and Lee held a restricted meeting to talk candidly, a senior official said, before they opened up the meeting to their staff members. They’re scheduled to hold a joint press conference Monday afternoon. The two leaders also discussed space, the role of the 10-member Association of Southeast Asian Nations and other regional issues including China and Myanmar, senior administration officials said.

The vice president made it clear that while the US welcomes stiff competition with Beijing, the Biden administration doesn’t want that competition to veer into conflict, the officials said.

Even as China’s growing economic and military might looms large over the meetings this week, US officials have tried to divert attention from countering Beijing and sought to frame the trip as a way to hone in on US engagement in the region and advancing shared interests — without asking countries to choose sides between Washington and Beijing.

“While the vice president’s message of ‘We’re back and you can count on us’ may be met with some skepticism during her trip, this can be overcome with the announcement of concrete initiatives with serious follow-through,” she said. “To be successful, any new initiatives must be framed in the affirmative and not as anti-China.”

The US and Singapore finalized agreements on cybersecurity that affect the financial sector, military engagement and regional capacity building. The US Treasury Department and the Monetary Authority of Singapore concluded a memorandum of understanding on cyber cooperation to help facilitate information sharing on cyber threats to financial markets.

The US and Singapore cybersecurity agencies also finalized a memorandum of understanding to enhance information sharing and coordination for cyber incident response and help build cybersecurity capacity across Southeast Asia.

In addition, the two sides announced the launch of a climate partnership, which will focus on increasing sustainable financing mechanisms and mobilizing private capital R&D efforts for climate mitigation and adaptation.

On global health, the countries agreed to work together to increase preparedness by enhancing the capacity of Southeast Asian countries to identify new Covid variants and provide early warnings for diseases. They’ll also deepen cooperation on research for treatments.

Harris’s visit to the city-state comes as Singapore’s day-to-day life is shut down to contain coronavirus outbreaks and residents are essentially in lockdown.

That makes the usual pleasantries associated with such a trip difficult. But at least one customary ceremony will take place: Lee named an orchid after Harris — a tradition for foreign guests of honor.

Harris will try to make her mark in the region as the first vice president to visit Vietnam later this week. She is scheduled to depart Singapore for Hanoi on Tuesday afternoon.