Justo gets royal pardon; to serve one more year of jail time 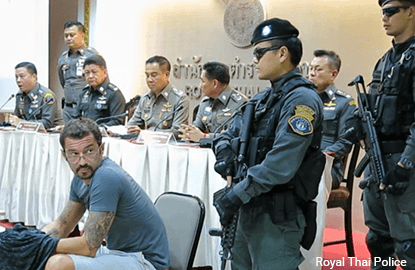 KUALA LUMPUR (Aug 9): Andre Xavier Justo, who was sentenced to three years' imprisonment in Thailand for attempted blackmail of his former employer PetroSaudi International Ltd, has received a royal pardon and will have to serve another year of jail time, Bernama reported today.

The pardon meant that Justo, who has been described as "a very good prisoner" by the Thai prison authority, will have his sentence commuted by one third.

Worrasit said Justo had served one year of his sentence since he was found guilty by the Bangkok South Criminal Court last year. With the royal pardon, he has another year to serve.

He said the 49-year-old former IT executive would probably serve the remainder of his jail term on parole or be transferred to another prison, depending on the conditions stipulated under the Royal Pardon.

"The announcement of the Royal Pardon was released in a Royal Gazette website last night. I checked with the correctional officer and he confirmed Justo's name was on the list," he told Bernama today.

On Aug 17 last year, Justo was found guilty after he admitted to attempting to blackmail PetroSaudi International, which had dealings with 1Malaysia Development Bhd.