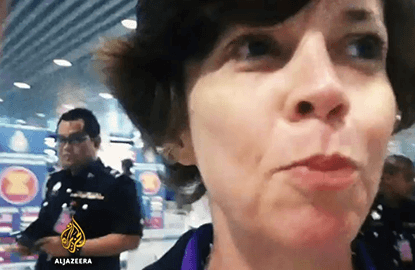 (Sept 11): A journalist who produced a half-hour investigative piece on the Altantuya Shaariibuu murder, aired on Al Jazeera today, was deported by Malaysian authorities on June 14.

“I’m being escorted by about 5 customs agents and a man in a military outfit, so I’m about to board my flight to Sydney. Clearly I hit a raw nerve," Jolley said in the programme as she walks to board her flight to Sydney.

A statement by Al Jazeera said the Home Ministry deported her as her activity had a "potential negative effect on the image of Malaysia".

The programme investigates those involved in the Altantuya saga, and asks whether the two men convicted of the murder are “fall guys” for others.

In its response, the Malaysian government strongly denied any links between the Mongolian woman and Prime Minister Datuk Seri Najib Razak, and dismissed allegations of corruption and kickbacks surrounding the murder as attempts by political opponents to smear him.

Jolley's deportation to her home country, however, allowed her to track down a relative of Sirul, one of the convicted murderers currently detained by the Australian immigration in Sydney.

The relative spoke of his conversation with Sirul about the night of Altantuya’s murder.

“I said, ‘Did you pull the trigger, like did you?” he recalled.

“I said to him (Sirul) ... you had a choice, you had a choice of walking away from the situation and leaving it alone. He said, ‘I would have been dead’, cause of what he knew.”

Putrajaya has responded to Al Jazeera by strongly denying any links between Altantuya and Najib.

"The prime minister did not know, has never met, has never had any communication with and has no link whatsoever with the deceased.

"The two convicted individuals were not the prime minister's personal guards. This allegation is intentionally misleading, and has been used to perpetuate baseless conspiracy theories," Al Jazeera quoted a statement issued by the Malaysian government. – The Malaysian Insider