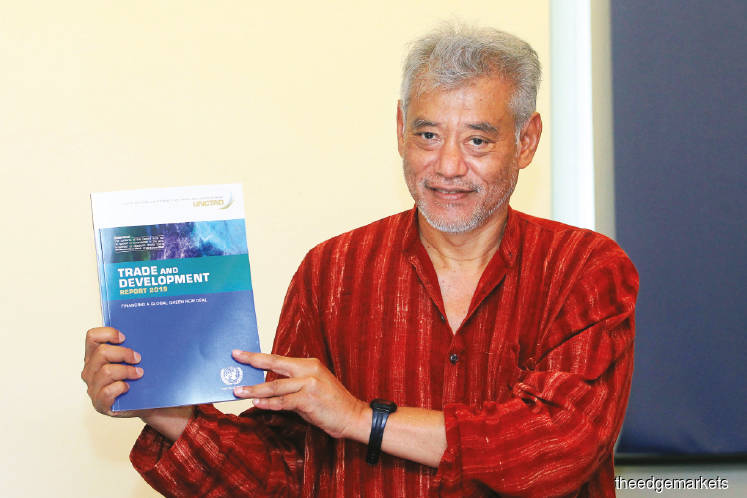 Jomo with the Unctad report, which was launched concurrently in Geneva, Switzerland. Photo by Shahrin Yahya

KUALA LUMPUR: The world economy is heading into troubled waters, with recession in 2020 now a clear and present danger, according to the United Nations Conference on Trade and Development’s (Unctad) 2019 report.

But while warning lights are flashing around trade tensions, currency movements, corporate debt, a no-deal Brexit and inverted yield curves, there is little sign that policy makers — nationally and internationally — are prepared for the storm ahead, the report states.

On that note, former senior UN official Prof Dr Jomo Kwame Sundaram, who presented the report here yesterday, said the Malaysian government, with the tabling of Budget 2020 scheduled in two weeks, should think of measures to counteract all the downward forces globally, which he said are already affecting the country’s economy.

“One important way is to make sure that the bottom 70% group in this country is able to spend a bit more, there is more breathing space for them. So thinking about ways and means by which you can replace aggregate demand in the country, particularly for goods that are produced in the country, will be very important,” he told reporters.

He also highlighted the rapidly growing debt levels in recent years as an issue, noting that for Malaysia, there has also been a massive decline in tax revenue due to a cocktail of factors, including the lower prices of petrol, palm oil, and lower revenue collection from certain tax sources. This calls for the government to cut off wasteful projects, or projects that may not contribute to economic revival, he said.

“Instead, focus on making sure if there is going to be any additional debt, that debt has to contribute to additional economic capacity and growth. That should be an important criteria,” he said.

Renewable energy is another aspect that should be given focus, said Jomo, especially in getting Malaysian companies involved in the production of photovoltaic solar panels, and increasing greater demand for palm oil-based biodiesel.

“The number one source of solar panels for US imports is Malaysia. But unfortunately, these are not Malaysian companies, these are American and Chinese companies that are based in Malaysia.

“There is absolutely no reason why Malaysian companies should not be involved in the manufacturing of these solar panels. The technology is not that complicated, it is quite well-known that there are very few patterns involved and it is quite easily acquired,” he said.

Jomo also said pushing through barter deals for the greater use of palm oil products “will not get Malaysia very far”.

“Times have changed. There were a lot of uncertainties in the 1980s about where some countries would get foreign exchange from, so Malaysia did very well by having these so-called barter trade deals with countries like India, the Soviet Union, Pakistan and China.

“But today, most of these countries, except perhaps for Russia, do not have that same kind of foreign exchange constraints. So, they are not trying to do barter deals anymore. If we keep on trying to do barter deals, if that is the only option Malaysia has, I don’t think we will get very far. We need to recognise that we need to create greater demand for palm oil products,” he added.

The Unctad report, which was launched concurrently in Geneva, Switzerland, called for a Global Green New Deal to make a clean break with years of austerity and insecurity following the global financial crisis, and to help bring about a more equal distribution of income while reversing decades of environmental degradation.

It proposes a series of reform measures to make debt, capital and banks work for development and finance a deal, supported by a new approach to international monetary arrangements aimed at promoting productive trade and reining in predatory finance.