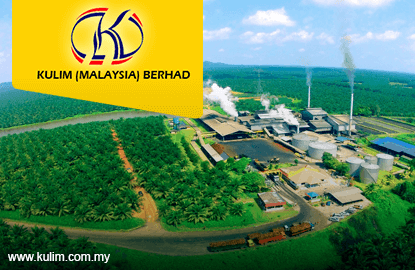 In a statement posted on Bursa Malaysia today, Kulim said Johor Corp — which owns, together with parties acting in concert with it, a 61.87% stake in Kulim — plans to undertake the privatisation via a selective capital reduction (SCR) and repayment exercise, which will entail a total payout of RM2.22 billion.

Johor Corp does not intend to maintain listing status of Kulim on the Main Market of Bursa Malaysia pursuant to the takeover.

"The proposed SCR entails a capital repayment of the proposed cash amount of RM4.10 per ordinary share held by the entitled shareholders of Kulim on an entitlement date to be determined later," the palm oil plantations company told the stock exchange.

It said the offer will remain open for the board's acceptance until 5pm on Nov 20, 2015. Johor Corp does not intend to maintain the listing status of Kulim on the Main Market of Bursa Malaysia.

"The non-interested directors will deliberate on the proposed SCR and, upon consultation with an independent adviser to be appointed, will decide on the next course of action. Accordingly, a further announcement will be made in due course," said Kulim.

Kulim last closed at RM3.30 on Wednesday with a market capitalisation of RM4.03 billion.

In an attached letter to Kulim, Johor Corp said its move to privatise Kulim was because the latter had in February disposed of its 48.97% equity interest in New Britain Palm Oil Ltd for RM2.8 billion, which was the major contributor to Kulim and its subsidiaries.

"Following the disposal, the major assets contributing to the revenue and profitability of Kulim comprise Malaysia oil palm plantations and its 50.8% investment in E.A. Technique (M) Bhd," it said.

It noted that compared to some other listed regional plantation players, Kulim's plantation hectarage is smaller and earnings contribution from this segment had also declined from previous years.

"Kulim also recently announced its intention to expand into the oil exploration business in Indonesia. In view of the volatility in oil prices in the last one year, it may take longer for this new business segment to be a significant contributor to the Kulim Group," it noted.

As such, and given the challenging market environment, Johor Corp said the proposed exercise represents a good opportunity for minority Kulim shareholders to realise cash for their investments at an attractive premium above the prevailing market price of Kulim shares now.