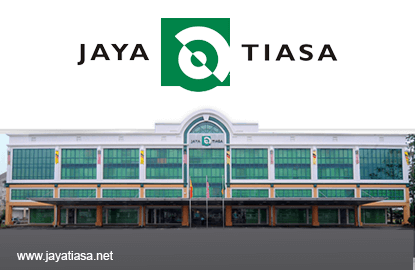 Jaya Tiasa Holdings Bhd
(Jan 4, RM1.34)
Maintain buy with an unchanged target price of RM1.96: We maintain “buy” on Jaya Tiasa Holdings Bhd based on a financial year ending June 30, 2016 forecast (FY16F) price-earnings ratio (PER) of 25 times. This is three notches below its 10-year forward PER of 28 times.

Jaya Tiasa has announced that the group will discontinue planting on its remaining plantation land bank representing 0.4% or about 280ha of its estimated plantable area of 69,873ha, after December 2015. 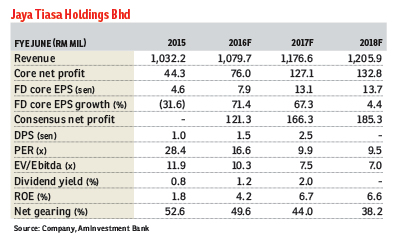 The company said the group had  given its commitment to comply with Wilmar’s Integrated Policy. Recall that at end-2013, Wilmar International Ltd launched a “no deforestation, no peat, no exploitation” policy that aims to advance an environmentally and socially responsible palm oil industry.

Planters were given a grace period until end-2015 to stop planting on peatlands. Jaya Tiasa said the group will implement “best management practices” on existing plantations on peatlands as defined by the roundtable on sustainable palm oil or peat experts.

We are neutral on this as Jaya Tiasa’s remaining plantable area is not significant, while the news of the Wilmar planting policy has long been factored in. This means the end of the group’s oil palm capital expenditure cycle, which will be positive for cash flows.

Its developed and planted area remains sizeable at  about 69,600ha.  Jaya Tiasa is on track to achieving our fresh fruit bunch (FFB) production assumption of 900,000 tonnes for FY16F (at 14.7 tonnes of FFB yield versus 12.5 tonnes for FY15). We continue to believe it would be able to produce at full steam, a steady state tonnage of about 1.5 million tonnes annually.

We understand that sustained efforts are being carried out to rehabilitate about 10,000ha of planted areas that have been neglected previously. This could take over a year.

Meanwhile, in a separate statement, Jaya Tiasa also confirmed that it had been cleared by the Malaysian Anti-Corruption Commission (MACC) of any illegal logging activities.

It said the MACC had lifted the suspension of a bank account that was frozen in relation to its investigation into illegal logging. We reiterate that the stock provides a cheap entry into the oil palm play. To recap, at our fair value, we are pricing the oil palm division at an enterprise value (EV)/planted ha of RM24,000 — cheap by any measure. The EV/ha for brownfield land bank in Sabah and Sarawak is reportedly between RM62,000 and RM68,000. — AmInvestment Bank Bhd, Jan 4