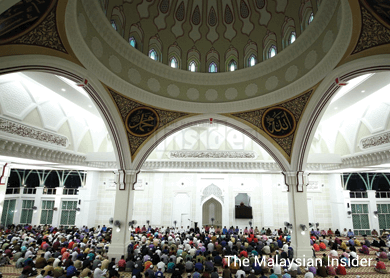 (May 29): The Federal Territory Islamic Affairs Department (Jawi) wants Muslims to boycott reality TV shows as they do not comply with Islamic law and can lead Muslims astray.

In its Friday sermon today, the department said such TV programmes were a form of hedonism created purely to corrupt the minds of Muslims, especially teenagers.

"However, the reality is how many programmes presented are in accordance with the requirements of Islamic laws?” it said.

The department said some of the programmes were defamatory and pitted their artistes among themselves.

"Additionally, reality shows also bring forth negative elements such as making obscene jokes, exposing the aurat, men dressed as women and so forth," Jawi said in its sermon entitled “Jihad Memerangi Kebatilan”.

The department said Muslims should address these negative symptoms with Islamic entertainment guidelines from the Department of Islamic Development (Jakim).

"Let us boycott such shows," it said.

Jawi also reminded Muslims to "berjihad" or fight against slander in social media because there was slanderous news being spread with the aim of splitting the unity of the community.

There were also attempts to threaten the government administrative system and create an unstable political environment in the country, it said.

"If we are careful in accepting the news and always examine its authenticity, then the agenda of certain quarters who wanted to see Muslims fighting among themselves will be buried.

"All of you are also reminded not to be the cause or be agents in spreading false news," it said.

Jakim also imposed gender segregation for audiences at concerts and shows while clamping down on music and lyrics that had elements of "worship" which were considered sacred to believers of other religions.

The rules were released by the department after they were approved by the 107th National Fatwa Committee Conference in February, and are available in a document linked to Jakim's website.

According to the document, this is the second edition of such rules.

Jakim said artistes must possess "noble and good characters" and should not have any criminal record, whether in civil or shariah cases.

They must also dress modestly, without exposing their "aurat" or parts of the body that cannot be exposed according to Islam, and must not wear any clothes that can lead to "exploitation" by the audience.

Dressing, accessories and hairstyles must not resemble that of a different gender of the artiste, Jakim said. Cross-dressing during any performance is also banned.

The religious authority also ruled that jokes made during performances must be appropriate and could not lead to "excessive laughter".

Besides that, jokes cannot be made at the expense of a "serious matter" and on "issues that are mournful".

All performances must not go against the sensitivities of any religion and any race, neither can there be acts of worship of others.

Dance performances, meanwhile, must not cause slander or lust, Jakim said, adding that men and women could not perform in the same routine.

The music accompanying the performances must inject peace and positivity and cannot evoke negative emotions that are contradictory to Islam, the guidelines said.

These guidelines replace the previous rules, which were mainly to prevent elements of vice and idolatry in performances. – The Malaysian Insider