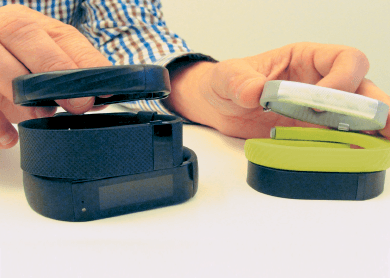 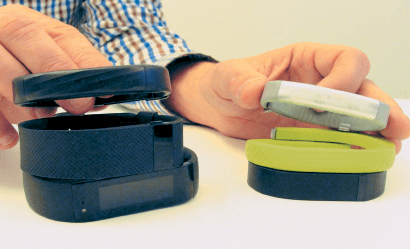 ON the one hand, or wrist, there may be an eye-catching Apple Watch, while the other will sport more discreet jewellery packed with Internet Age smarts.

Jawbone had that vision of the wearable computing trend in mind last week when it ramped its UP family of lifestyle-tracking bands and teased a coming model that enables American Express users to tap and pay at shop checkout counters.

“People often wear a watch at the same time they are wearing bracelets,” Jawbone vice-president of product management and strategy Travis Bogard told AFP at the company’s San Francisco headquarters.

“We can now put technology into those situations in a way that doesn’t disrupt how you would wear it. Then you can collect that information and do interesting things with it.”

A UP3 bracelet that tracks heart rate along with activity and sleep is shipping after a delayed release while technicians improved water resistance.

Jawbone introduced another new Up band with an overhauled design and almost half the mass of its predecessor.

Bogard showed off a coming flagship UP4 model with sensors capable of measuring heart rate and other biometrics, and which could be used at checkouts that have American Express contactless payment systems.

“We have created a seamless payment experience all in the tap of a wrist,” said Leslie Berland, executive vice president of digital partnerships and development at American Express.

UP4 will be priced at US$199 when it is released in the middle of this year, according to Bogard. The lowest priced UP model is US$49.

Bogard was undaunted by the pending arrival next week of Apple Watch, which unofficial estimates indicate has about a million pre-orders and could ignite the smart watch market.

“Those are really daytime wear,” he said of smartwatches.

UP bands are designed to be jewellery that “disappears on the body” while being worn all day every day, using sensors to track activity, sleep and more.

The bands synch to smartphones and feed what they learn to the Internet cloud, where “smart coach” software provides personalised advice for healthier lifestyles.

Jawbone has focused on creating a platform that can synch to applications tailored for an array of smartwatches from major players including Apple, Huawei, Asus, LG and Motorola.

Data gathered by wearable computing devices can be used by “smart coach” to coax or nudge users toward lifestyle goals from losing weight to drinking more water or getting to sleep earlier.

While Jawbone believes people will want UP hardware, it has made the platform open so developers can synch devices, applications or services to the system.

“One thing that differentiates tech companies from competitors is being a platform,” Gartner analyst Brian Blau told AFP. “That is something of a Holy Grail. Getting to that point and kick-starting an ecosystem is really lucrative, and could be for Jawbone.”

Having services, applications, smartwatches and more tuned to its platform diversifies opportunities for Jawbone to make money.

Gartner has found that while people have been showing interest in wearable computing, it hasn’t translated into massive mainstream purchasing.

“I think that the Apple Watch is going to pique people’s interest and they will pay more attention to wrist wearables,” Blau said.

The analyst doubted there would be a quick shift to people using watches, bracelets or other wearable computers as wallets since it is already easy enough to use credit cards for purchases.

Overall, it remains early days for wearable computing with innovations on the horizon including virtual or augmented reality head gear and sensors or chips embedded in clothing fabric, according to the analyst.

“The wearables industry is only just getting started,” Blau said.

“The conundrum the wearables industry is in today is which will stand out as the next platform or the next spot on the body where people will wear things.” — AFP