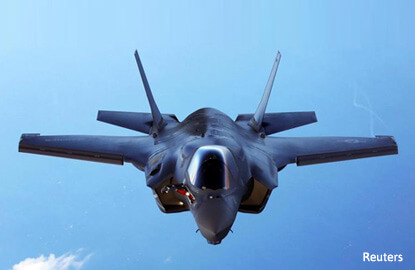 TOKYO/WASHINGTON (Feb 1): Tokyo has secured cost cuts on support equipment for its next batch of six U.S. F-35 stealth fighter aircraft of around US$100 million, according to sources and Japanese budget papers, on top of savings being finalised for all buyers of the high-tech jets.

The deal represents a rare case of Tokyo negotiating down the price of military hardware from its U.S. ally and underscores progress for the Lockheed Martin Corp — run F-35 program, which has faced criticisms over cost overruns and other problems.

U.S. President Donald Trump, who lashed the program as "out of control" in December, said on Monday he had been able to shave some US$600 million from the latest U.S. deal to buy about 90 F-35s from Lockheed.

But defence analysts and sources downplayed news of those cuts, saying the discount hailed by Trump was in line with what had been flagged by Lockheed for months and would apply to other countries committed to the program.

Lockheed and the Pentagon did not directly respond to questions regarding the Japanese deal.

A spokesperson for the U.S. Defense Department office which runs the F-35 program said negotiations over the current batch of fighters, known in the industry as LRIP 10, was continuing.

"For every nation that buys an F-35 in LRIP 10, the base price of the F-35 will be the lowest in F-35 history," Lockheed spokesman Michael Rein said.

The price of the F-35 has been dropping with each new batch as Lockheed and the U.S. government ramp up production, helping to lower overall costs.

Four sources told Reuters that Japan had further trimmed the price for its latest order, largely on ground support costs such as parts, logistics and technical assistance.

"We went through each item in detail and negotiated with the U.S.," said one of the sources in Japan with knowledge of talks.

In a budget request last year, Japan's Ministry of Defence pegged the price of the six F-35s at 15.7 billion yen (US$136.81 million) each. That had been cut to 14.6 billion yen when the budget was approved in December, in line with the 6%-7% per plane reduction flagged by the Pentagon late last year.

The cost of support equipment dropped significantly, to 30.9 billion yen, from 42.3 billion yen, according to the publicly available documents.

Cost cuts on such deals are typically done by removing some equipment or swapping out expensive components for cheaper ones.

Officials from a new Japanese defence procurement agency and Pentagon personnel met several times in Tokyo between August and December, before agreeing on the lower price, said one of the sources, who were not authorised to speak publicly about the deal.

The total cost for the Japanese deal was just over US$1 billion, around 12% lower than budgeted in August.

The cost to the United States for its latest F-35 contract is expected to be around US$9 billion, with the price per plane falling below US$100 million.

Japan's higher budgeted per aircraft costs of around US$128 million include the aircrafts' engines and additional funds to have 38 of the 42 F-35s it plans to buy assembled in Japan by Mitsubishi Heavy Industries.

Japan does not buy the fighters directly from Lockheed but from the U.S. government through its Foreign Military Sales (FMS) system, which Washington uses to keep tight control on sensitive military equipment.

The U.S. government typically charges a 3.8% sales fee for those transactions.

Until now Japan has rarely questioned the price of equipment purchased from its U.S. ally, making it a lucrative market for the likes of Lockheed, Boeing Co, Northrop Grumman and Raytheon Co.

Japan is equipping its military with American kit to help reinforce maritime holdings along the southern edge of the East China Sea where it is locked in a dispute over territory with Beijing. In addition to the F-35s, Japan is buying the Bell Boeing Osprey tilt-rotor aircraft and Northrop Grumman's Global Hawk drone.

Japan's splurge on U.S. equipment has put a strain on its finances. In 2016, procurement through the Foreign Military Sales system totaled 485.8 billion yen, compared with 117.9 billion yen three years earlier.

Tokyo will begin deploying the first of its stealth fighters around the end of this year.