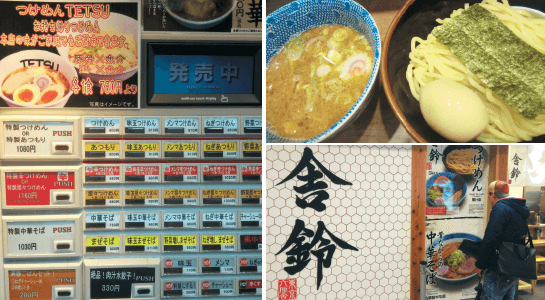 I WAS pacing outside a seemingly delicious ramen shop for 10 minutes, trying to figure out the Japanese words on the vending machine that did not have illustrations of the food it served, and trying to decide which button to hit.

I decided to wait no more and barged into the shop, demanding for an English menu.

Clearly the language barrier was the first of the challenges, especially to a solo traveller who would be in Tokyo for two months. Second was the fact that finding sustenance could be a daily nuisance, especially if you are out of the touristy areas.

I quickly found that while there was no English menu, the guy was still going to help. He scurried to the vending machine and pointed to a button.

“No 1!” he said, trying to explain the top seller was the dipping ramen in which the soup and noodles are served separately. You dip your noodles into the hot, thick-flavoured soup, before feeding yourself a spoonful of both.

I quickly said “arigato” (thank you) and pressed the “No 1” without hesitation. I was impressed by his readiness to offer help to a tourist lost in translation, even with the most basic English to communicate with me. After this episode, I asked the waiter of any restaurant I entered to recommend their “No 1”.

If I had questions when browsing through some products at a department store, I would fire away my questions to the staff. And yes, a lot of times the process involved hand gestures and a smartphone translation app — which worked wonders. While there were times that my questions were not fully understood or answered, it left me with a feeling of accomplishment and an inch closer to blending in with the community.

On one occasion, I even asked for a discount when checking into a hotel in Osaka for a four-night stay. “It’s my birthday today. Do you have any discounts for me?” I asked jokingly.

Suddenly, the three pretty receptionists at the counter greeted me in unison: “Happy birthday!” Their supervisor rewarded this birthday boy with a complimentary breakfast voucher worth ¥500 (RM15). It was my best birthday gift yet in a foreign land!

Detail-oriented isn’t suffice to describe Japan’s service industry as the Land of the Rising Sun has upped the ante against regional peers by going the extra mile as well as putting themselves in their clients’ shoes.

It is no wonder that my Japanese friend who was in Beijing, China, for three years, and recently returned to Tokyo, said with pride: “I travelled around China and the United States, and none of their service standards came close to Japan. It’s good to be home!”

A few days earlier, I was buying insoles for my shoes at a local chain in Tokyo’s Ueno district, and checked with a shopkeeper if I got the size correctly. He picked up my sweaty shoes without a second thought, looked at the bottom and told me I needed a size 27, instead of the 25.5 that I was holding. I told him I wanted to put them right on and he dutifully inserted them into the shoes without hesitation.

Everywhere I went in Tokyo was inundated with tourists speaking in various languages and most importantly — their hands were filled with shopping bags. Considering the hospitality and lengths that its service industry goes in making sure that the customer is king, Japan should keep it coming.