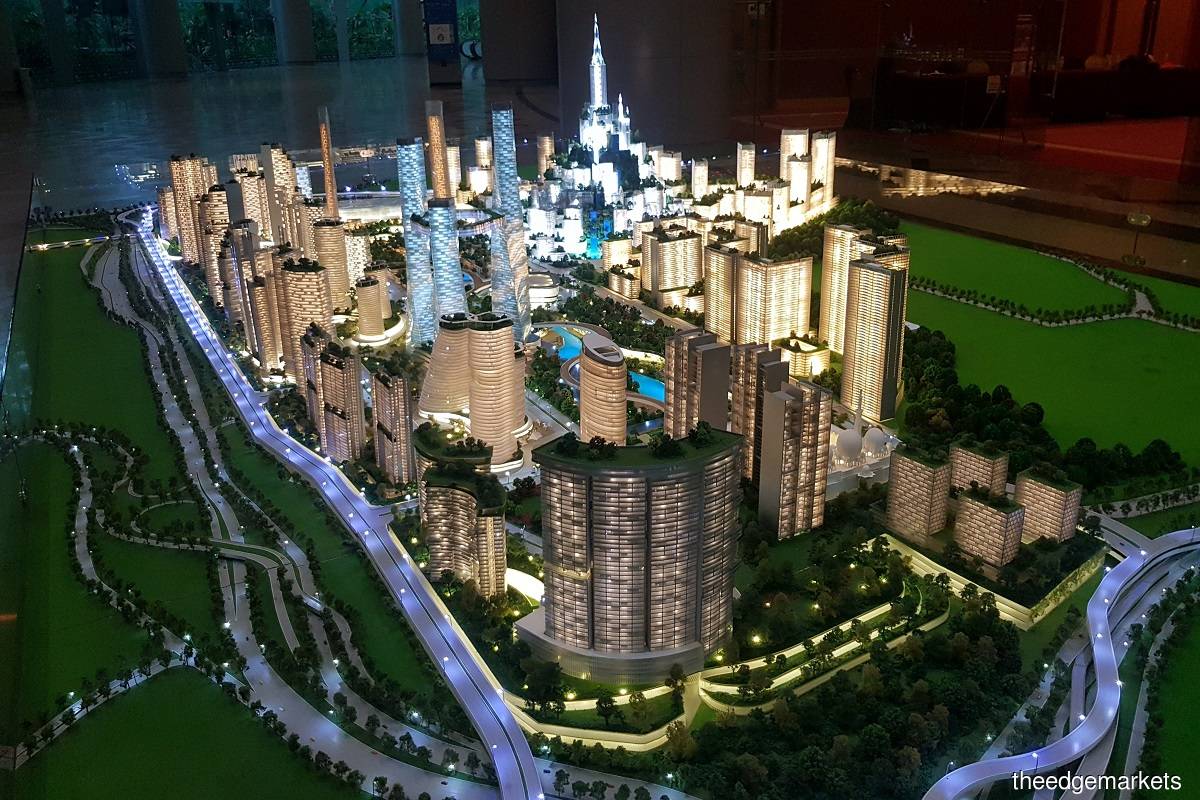 A scale model of the Bandar Malaysia project. (Photo by Suhaimi Yusuf/The Edge)

KUALA LUMPUR (July 14): The Ministry of Finance (MOF) and IWH CREC Sdn Bhd have mutually agreed to terminate the deal for the latter to buy a 60% stake in Bandar Malaysia project that is located in the former air force base near Sungai Besi, southern Kuala Lumpur, for RM7.4 billion.

The termination came after both parties agreed not to extend the conditions precedent period of the agreement, according to the joint statement issued by the Ministry of Finance’s wholly-owned TRX City Sdn Bhd and IWC CREC.

It is understood that IWH CREC will get the refund of RM1.54 billion from the MOF following the termination — the total sum that the joint venture has paid on the staggered basis.

The agreement lapsed on May 6 this year, as the respective parties failed to meet the conditions precedent within the stipulated period.

Both parties have not been able to mutually agree to the terms of the extension of the condition precedent period, said a joint statement.

“TRX City remains committed to realize the Bandar Malaysia vision, and any future business and commercialization plans will take into account market conditions and the national socio-economic agenda, to ensure that it continues to play its role as a significant economic enabler that will add substantive benefits for the country," said the statement.

The termination came 28 months after the joint venture had worked hard to lobby to buy the 60% stake.

Coincidentally, the deal was aborted after the Government decided to cancel the Kuala Lumpur-Singapore High Speed Rail project by compensating Singapore.

Investment analysts said this could be a stroke of luck for IWH to exit the deal given the Covid-19 pandemic, the gestation period for the mega development is even longer.

A source familiar with the deal commented that the Covid-19 pandemic has changed the real estate market tremendously. It is a totally different scenario now compared with when the deal was struck, in terms of office space demand.

Among the conditions precedent that were not fulfilled including the initial plot ratio of one to eight and tax breaks.

Meanwhile, there is also market talk that Lim had difficulty obtaining financing for the share purchase. “The difficulty to get financing is again due to the unfulfilled conditions precedent as banks will take all these into consideration,” said the source.

A deal that went through three Malaysian governments

There had been obstacles along the journey for IWH CREC to acquire a stake in the Bandar Malaysia development project since day one. The change of government played a big part in it. In a nutshell, the joint venture has dealt with three governments in the course of sealing the acquisition since 2015.

To recap, Bandar Malaysia project was one of the controversial 1Malaysia Development Bhd’s (1MDB) real estate investments, besides Tun Razak Exchange (TRX), when Datuk Sri Najib Razak was the Prime Minister and Finance Minister then.

On Dec 31, 2015, IWH CREC struck its first deal to buy the 60% stake in the Bandar Malaysia project for RM7.41 billion. Back then, the joint venture concluded the agreement with 1MDB’s former president and group executive director Arul Kanda Kandasamy.

High Speed Rail (HSR) was said to be part of the development to make Bandar Malaysia a regional hub for multi-national companies.

In an abrupt turn of events, the joint venture was informed that the share sale agreement (SSA) had lapsed due to failure to meet conditions precedent in May 2017 — 16 months after the agreement was signed.

In another unexpected turn of events, a year later, the change of government after the 14th General Election opened the window of opportunity for IWH CREC to renegotiate with Pakatan Harapan government to revive the stake sale.

During former Prime Minister Tun Dr Mahathir Mohammad’s second visit to China in April 2019, Malaysia signed a framework agreement to revive the deal to sell a 60% stake to IWH-CREC.

IWH CRECT then signed the restated and amended share sale agreement for the equity sale in December 2019 — roughly three months before the country had a change of government again in less than two years.

Today, the joint venture has ended the agreement with Perikatan Nasional-government.

“China Railway Group will continue to work closely with TRX City in respect to any future co-operation in Malaysia. IWH will continue to support the Government of Malaysia in nation-building,” the statement said.