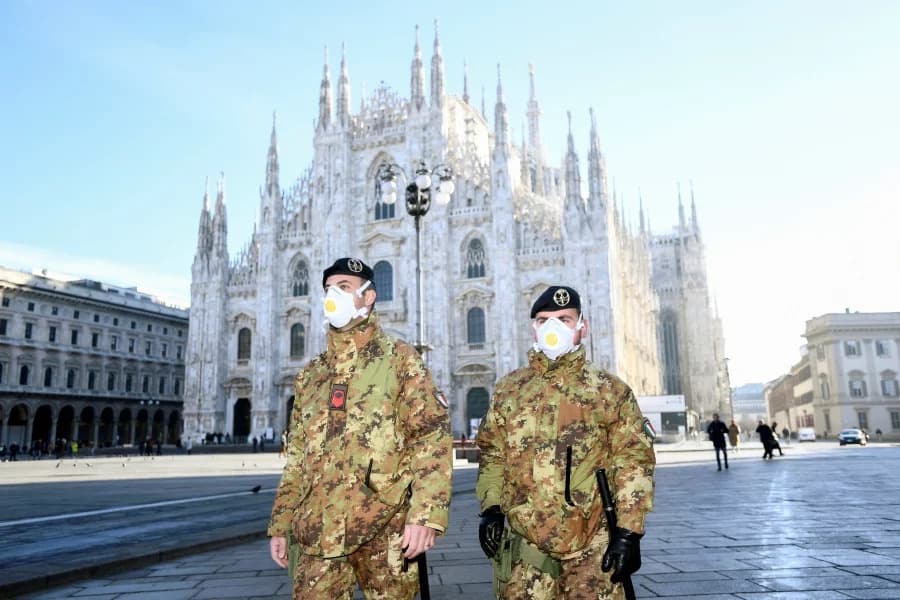 Chancellor Angela Merkel, speaking from precautionary quarantine at her home in Berlin, said Thursday it was premature for Germany to consider lifting lockdown measures, which her country was slower to impose than other big European nations.

“We’re not even close to where we can see if the measures are working,” Merkel told reporters on a conference call. “So I really have to ask people in Germany for patience.”

With Italy and Spain reporting the most deaths worldwide, Europe’s outbreak is engulfing health-care systems, forcing doctors to choose who should die and giving a foreboding of what could lie ahead in other advanced countries. While death rates in Italy and Spain declined marginally on Thursday, reported infections increased in both countries.

Leaders of the Group of 20, which includes Germany, France and Italy, said they were injecting over $5 trillion into the global economy and committed to do “whatever it takes” to overcome the coronavirus pandemic and its fallout.

Like the G-20, European Union leaders met virtually on Thursday to discuss the crisis. Merkel, who has twice tested negative for the coronavirus, commented on the limitations. “Of course you don’t have the opportunity to walk around and talk to someone at the table,” she said.

The World Health Organization’s director for Europe, Hans Kluge, said it’s too early to say the disease had peaked in the region, which accounts for about 70% of the more than 20,000 deaths from the virus. Scenes of shocking misery are playing out in worst-hit areas including parts of Spain and Lombardy in northern Italy, where Milan halted cremations for victims who aren’t city residents because facilities are overwhelmed with the dead.

As governments in many regions impose previously unthinkable restrictions on citizens, businesses and transportation, Italy recorded the most infections in five days as the disease spread further in Lombardy, Italy’s economic and financial heartland.

Testing has expanded in Lombardy, helping to explain why almost half of the acceleration in Italy’s 6,153 new cases were in the Milan area. There were 662 deaths nationwide on Thursday, compared with 683 for the preceding 24 hours. The pace of deaths also slowed slightly in Spain, which has extended a state of emergency through April 11.

For the EU summit, France, Italy and Spain were pushing for a nod to the option of joint debt issuance, an idea that’s always run in to German-led resistance. A renewed plea by European Central Bank President Christine Lagarde, who quarantined herself last week after exposure to a person with the coronavirus, also fell on deaf ears.

That’s after the ECB stepped up by scrapping most bond-buying limits in its 750 billion-euro ($819 billion) pandemic emergency program, a landmark decision that massively boosts its power to fight the economic fallout. Government bonds rallied across the euro area.

Merkel said the European Stability Mechanism, a rescue fund set up in 2012 during the euro area’s debt crisis, “is the preferred instrument” for crisis aid. EU finance ministers will discuss detailed steps over the next two weeks, she said.

European airlines won a measure of relief on Thursday when the EU parliament suspended until October their obligation to use airport slots or risk losing them. The goal is to avoid empty planes flying routes just so airlines can retain the rights, which can be worth millions of dollars.

Global automakers are facing an unprecedented challenge after the pandemic crippled demand from China to Europe and the U.S.

One of Germany’s industrial flagships, Mercedes maker Daimler AG, is in talks with banks on arranging a new credit line of at least 10 billion euros, according to people familiar with the matter. In another ripple effect, Volkswagen AG said it’s extending the shutdown of its German factories to April 10 because of falling demand and supply disruptions.