Is it true the government’s risk exposure to 1MDB is low?

MUCH has been said about 1MDB’s ballooning debts, which as at FY2013 ended March 31, stood at RM36.0 billion and are likely to be over RM40.0 billion for FY2014. 1MDB only has the power assets to generate cash flow (and that is only enough to pay interest on the RM10.5 billion debt taken to buy these assets), while its only other source of income are any dividends paid to it from investments it has made.

In FY2013, its financing costs were around RM1.6 billion and this is expected to rise in the years ahead, raising  concerns that should 1MDB run into trouble, the government – meaning taxpayers – will end up with a large liability.

In response to questions raised about the mountain of debt, the Ministry of Finance (MOF) has tried to comfort the public by saying that the government only provided a guarantee for one debt issue, that is the RM5.0 billion bond that was arranged by AmInvestment Bank Bhd in 2009. It has suggested that the government therefore faces only a small risk exposure to 1MDB’s RM36 billion debt.

This is not an accurate picture. Why is that so?

Letter of support from the goverment

In March 2013, Goldman Sachs International arranged for a bond issue of US$3.0 billion (RM9.6 billion) on behalf of 1MDB Global Investments Limited, which in turn is wholly owned by 1MDB. To facilitate the fundraising, the government gave a letter of support dated March 14, 2013, addressed to 1MDB Global Investments, 1MDB and the trustee of the Issue, BNY Mellon Corporate Trustee Services Limited. The letter of support is enclosed as part of the offer document for the bond issue.

While the MOF stressed that the letter of support was not an expressed or implied guarantee, it, however, went on to say: “The government of Malaysia hereby confirms and undertakes to provide necessary financial assistance to the Issuer in respect of the Debt as follows”:

i) In the event the Issuer (1MDB Global Investments) is unable to pay the funds due under the debt or if there are any shortfalls in the payment of the funds, 1MDB shall first endeavour to inject the necessary capital to ensure that the Issuer is able to service its obligations

ii) In the event 1MDB, as shareholder of the Issuer, fails to provide the required funds, Malaysia shall then step in to inject the necessary capital into the Issuer or make payments to ensure the Issuer’s obligations are fully met.

Lawyers and bankers say a letter of support, while short of being a guarantee, carries the weight of an implicit guarantee because if, for instance, Malaysia does not carry out the undertaking it has given, it will have a disastrous impact on future international fundraising by Malaysian entities.

Indeed in the offer document, under “Risks Relating to the Issuer”, Goldman Sachs states: “If the Issuer is unable to satisfy its obligations in respect of the Notes (bonds), the Note holders will be dependent on the Government of Malaysia satisfying its obligations under the Letter of Support”.

Bankers say that without the letter of support, the bond issue might not have taken place or 1MDB Global Investments would have had to pay 2.0 to 3.0 percentage points more than the 4.4% interest it now has to pay.

In the case of a US$1.75 billion (RM5.6 billion) bond issue, also arranged by Goldman Sachs in May 2012 for 1MDB’s wholly-owned 1MDB Energy Limited, there is an indirect exposure for the Malaysian government. This is because 1MDB, together with Abu Dhabi’s International Petroleum Investment Company (IPIC) PJS, acted as joint guarantors. And because 1MDB is wholly owned by MOF, it would be unthinkable that the ministry would not step in if 1MDB cannot meet its obligations.

But because there is no guarantee and no letter of support from the government, 1MDB Energy has to pay an interest rate of 5.99% to bondholders. Nonetheless, bankers say the government is unlikely to turn the other way should 1MDB fail to meet its obligations to its bondholders.

“Whatever the government says, there is an implicit guarantee for all of this and that is why there were investors who were prepared to take up the papers,” says a banker. “Without it, there was no way they could have raised the money as 1MDB had no real business and cash flow up to then (2012).”

But while these international investors may be content to earn between 4.4% and 5.99% in interest a year, Malaysian taxpayers – current and future generations – hope that 1MDB will not fail and that the government will not be required to step in to fulfil its obligations, whether explicit or implicit. 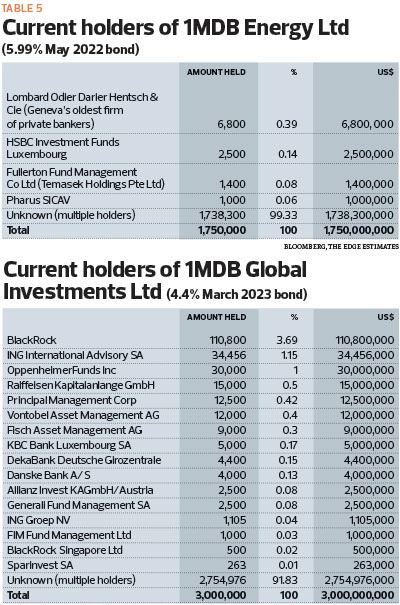