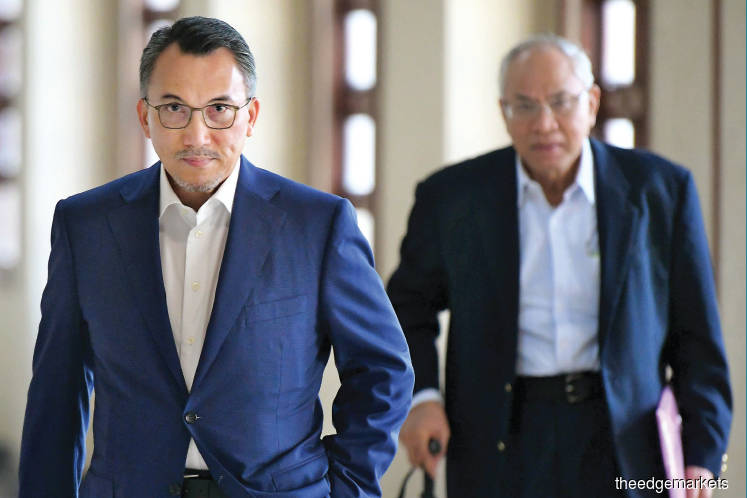 KUALA LUMPUR: Former SRC International Sdn Bhd chairman Tan Sri Ismee Ismail told the High Court here yesterday that former premier Datuk Seri Najib Razak, appointed as advisor emeritus of the company, had control of the subsidiary of 1Malaysia Development Bhd (1MDB) after its memorandum and articles of association (MAA) was amended following a letter from the ex-prime minister to its board of directors.

Ismee, the 39th prosecution witness, said during examination-in-chief by Deputy Public Prosecutor (DPP) Datuk Ishak Mohd Yusoff that the key personnel in SRC include the chief executive officer, chief investment officer and chief financial officer whom the board may refer to occasionally.

Ismee noted the amendment to SRC’s MAA was stipulated in its board meeting’s minutes dated April 23, 2012.

When asked by the prosecution about the amendment’s implication, Ismee said: “The implication to SRC is the advisor emeritus’ views would have to be taken into account in all material and strategic issues on the company.”

“At the time, the advisor emeritus is Najib,” he added.

Ishak: Does the amendment in the memorandum and articles show the advisor emeritus has control of the company?

Ismee: Yes, he has control.

The witness added that any decision made was brought to SRC’s board of directors through the company’s managing director (MD).

The MD then was Nik Faisal Ariff Kamil.

To a question by Ishak, Ismee explained that SRC’s source of fund was the RM4 billion loan from the Retirement Fund Inc (KWAP) and a RM20 million launching grant by the government.

The witness added that the funds were for investment and working capital.

Yesterday, he testified that Nik Faisal would liaise with Najib on decisions to be made.

This included a meeting between both of them on Sept 7, 2011 — several days after SRC received the first RM2 billion loan from KWAP — where the former premier ordered SRC to transfer RM1.8 billion of the loan overseas.

A total of RM1.5 billion was transferred to BSI Bank in Switzerland and RM300 million to Bank Julius Baer & Co in Hong Kong, while RM200 million was kept locally for operational purposes.

Unable to verify minutes over directive to transfer RM1.8b offshore

During cross-examination by defence counsel Harvinderjit Singh, Ismee was asked at length about the minutes he purportedly obtained from Nik Faisal over his purported meeting with Najib on Sept 7, 2011 about the money transferred abroad.

The witness said he found the minutes of Najib and Nik Faisal’s meeting in his briefcase at home only this year, which he then handed to the Malaysian Anti-Corruption Commission.

Ismee explained that he must have asked Nik Faisal to give him the minutes of the latter’s meeting with Najib during the SRC board meeting on Sept 13, 2011, during which the board was briefed by Nik Faisal about the then premier’s directive to put the funds overseas  for better returns.

The witness agreed with Harvinderjit that he could not confirm the authenticity of the Sept 7, 2011 meeting’s minutes, which the court identified as ID499 but did not classify as evidence.

Harvinderjit then suggested it was unusual to keep minutes of a meeting involving only two people, which Ismee refuted.

A brief tussle between Harvinderjit and Ismee ensued when the former kept cutting the latter off while he tried to answer questions from the defence lawyer, prompting DPP Datuk V Sithambaram to interject.

Ismee then responded: “It is not unusual [to keep minutes of the meeting], but it is unusual because the minutes involved the prime minister.”

The former SRC chairman added that Najib did not attend any of the SRC meetings while he helmed the company.

Ismee resigned on Aug 15, 2014, citing corporate governance issues pertaining to the management of the company by Nik Faisal — especially regarding the company’s accounts and its finances.

He testified yesterday that he resigned from SRC after reading The Edge, that the company had yet to submit its 2013 audited accounts, despite the company claiming earlier that they had been submitted.