Iris expects property business to do well in FY2016 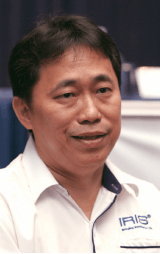 IRIS CORP BHD’s loss-making sustainable development (SD) division, under which its property development activities fall, is expected to turn around in the next financial year ending March 31, 2016 (FY2016) on the back of its projects in Papua New Guinea (PNG), says its managing director Datuk Tan Say Jim.

SD is one of eight divisions that the diversified group operates. Despite the division being the second largest revenue contributor, accounting for 19.5% of the group’s first six months’ revenue of RM284.76 million in FY2015, it has yet to show a profit.

Iris, in which Federal Land Development Authority (FELDA) owns a 25.8% stake, has traditionally derived the bulk of its earnings from the trusted identification (ID) division, which houses its electronic passport business.

“The SD division will start showing a profit in FY2016. If I were to take a very optimistic view, I’d say this division’s profits can match (that of) trusted ID. If I’m cautious, I’d say maybe 50% of trusted ID,” Tan tells The Edge in an interview.

In the six months ended Sept 30, 2014, the trusted ID division generated a profit of RM45.39 million, while the SD division made a loss of RM15.07 million. Weighed down by its loss-making divisions, Iris’ net profit in the same period was RM3.13 million.

“We’re confident (of this division’s prospects) mainly because of our Gerehu Heights project in PNG and the fact that we’re now also beginning to get contracts from individuals to build private homes there. Construction margins in Malaysia are only about 10% to 12% but in PNG, you can get margins of up to 40% at today’s prices,” he says.

Gerehu Heights, with a gross development value (GDV) of RM300 million, was Iris’ maiden foray into property development last year. The group plans to build 290 villas on a 34-acre parcel in Port Moresby owned by its joint-venture partner Kida Maru Holdings Ltd. Kida Maru will take 25% of the turnover from the project.

Iris has already launched the first phase of the project, involving 52 units, all of which have been taken up. The average selling price of the houses is about RM1 million.

Analysts say PNG faces a severe housing shortage amid a recent boom in its mining and petroleum sectors, which has fuelled demand for housing and driven up property prices tremendously.

Apart from Gerehu Heights, Iris is also working to jointly develop a satellite township in PNG on 303ha with local partners.

“It’s a five to six-year project, and looking at the housing shortage there and the price of houses currently, we think the GDV could reach RM6 billion,” Tan says.

While it may have already started making a name for itself as a property developer in PNG, Iris only clinched its first property development project in Malaysia last week.

In an announcement last Tuesday, the group said it will form a joint venture with Technology Park Malaysia Corp Sdn Bhd (TPM) to develop a residential project on a 28.89-acre parcel in Bukit Jalil owned by the latter.

Tan says Iris will be investing an initial sum of RM130 million for the first phase of the project, and the plan is to develop a 21-storey apartment building aimed at students of higher learning institutions around the area and 100 units of townhouses.

The group will raise money through internally-generated funds and bank borrowings for the project.

“As long as the loan is still outstanding, Iris will have a 70% share in the joint venture. If the loan is paid off, then the shareholding ratio will change more in favour of TPM,” he says.

Tan adds that the land will be developed over a period of five years. He hopes to start construction for the first phase by end-2015.

“If there’s good take-up for the first phase — we reckon it will be good because of the strong demand from college students and employees at Technology Park — then we’ll probably replicate what we build in other phases,” he remarks.

As with all its developments, Iris will use its industrialised building system (IBS) technology based on prefabrication construction. This helps it deliver projects faster than traditional developers.

Prior to this project, Iris had built low-cost housing estates for the government and FELDA under the Rimbunan Kaseh (RK) and Sentuhan Kaseh (SK) projects respectively.

“We’re excited about this (latest) project because it allows us to showcase our building system for higher-end houses. The market perception in Malaysia is that the IBS system is only suitable for affordable homes. But in Port Moresby, we sell our (IBS-built) single-storey houses for no less than 600,000 kina (RM825,908) and a double-storey house goes for over 1.3 million kina,” Tan says.

Iris’ strategy for property development, whether in Malaysia or abroad, has been to team up with landowners.

“Our balance sheet is not strong enough to buy land on our own. We’re still very new in property development, and our attention will continue to be mainly focused on PNG because of the prospects there,” he says.

Tan expects the earnings from the project with TPM to reflect in Iris’ books only in FY2017.

The group’s net profit for FY2015 is unlikely to top the previous year’s RM22.3 million, partly because of its SD division.

“The SD division is in a gestation period — it’s partly because of the RK and SK projects, where margins are not that big. The construction margins we’re looking at is about 11% to 12% for this kind of projects, but sometimes, we experience delays (due to long approval processes) and so the delays eat into our margins,” Tan explains.

Iris’ other divisions include business solutions and transport, agriculture and food security, education and packaging.