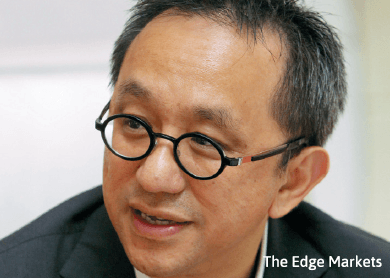 KUALA LUMPUR: Aseana Properties Ltd, a London-listed property developer in which Ireka Corp Bhd has a 23% stake, plans to sell off some of its property assets and return capital to shareholders as early as this year, said Ireka group managing director Lai Voon Hon (pic).

He said the proposal is pending the approval from Aseana’s shareholders at the forthcoming extraordinary general meeting (EGM) in June this year.

“I am hopeful that with Aseana’s plans to realise its assets, we will be able to get our [share of] capital returns. Ireka is determined to continue providing value for our shareholders and this is the board’s top priority,” Lai told a post-EGM press conference yesterday.

He expects Ireka (fundamental: 0.2; valuation: 0.9) to realise some of the capital returns from its investment in Aseana over the next few years when the latter begins to dispose of some of its property assets.

“As a shareholder, we have been told it is an ongoing process and more details will be announced in the next few months,” Lai said, adding that a circular will be posted on the London exchange’s website after Aseana’s EGM.

He added that Ireka’s investment value in Aseana was RM230 million.

Ireka had initiated the listing of Aseana on the London Stock Exchange in 2007. The move allowed Ireka to undertake property development activities in Malaysia and Vietnam through its subsidiary Ireka Development Management Sdn Bhd (IDM), which is the exclusive development manager of Aseana.

Among the projects being managed by Aseana are Seni Mont’Kiara, Tiffani by i-Zen, 1 Mont’Kiara offices and retail mall, Four Points by Sheraton Sandakan Hotel and Aloft Kuala Lumpur Sentral Hotel.

Earlier at the EGM, Ireka shareholders approved the group’s disposal of a 8.45ha piece of freehold land in Senawang, Negeri Sembilan to Aeon Co (M) Bhd for RM53.66 million.

The group currently derives 85% of its revenue from its construction division and the rest from its property business.

He highlighted that Ireka will focus on expanding its property segment going forward.

“The group will launch two projects this year which have a combined gross development value of RM380 million. Apart from that, we also have RM2 billion worth of projects in the pipeline,” he said.

On its construction segment, he said the group’s order book stands at RM1.4 billion, of which about RM900 billion remains outstanding.

Lai added that the group has no plans to bid for overseas projects in the next one to two years.

Ireka shares closed up 4.4% at 83 sen yesterday, giving it a market capitalisation of RM134.99 million.