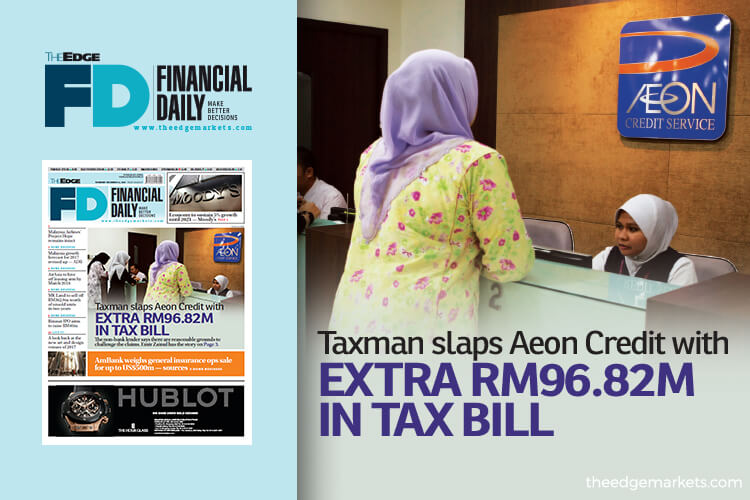 KUALA LUMPUR: The Inland Revenue Board (IRB) has slapped Aeon Credit Service (M) Bhd with a RM96.82 million bill for additional income taxes with penalties for the years of assessment of 2010 to 2016.

In a filing with Bursa Malaysia yesterday, the non-bank lender said it was served with notices of additional assessment with penalties for those years by the IRB on Tuesday.

“The company has appointed tax solicitors and is initiating proceedings to challenge the validity and legality of the said notices of additional assessment,” it added.

Aeon Credit said these taxes and penalties were in relation to the IRB varying the loan transaction collaterised by receivables undertaken by the company with a local financial institution to that of a sale of receivables, which the IRB did not specify which provision of the Income Tax Act 1967 in making this variation.

The penalties, meanwhile, are for alleged submission of incorrect returns.

Upon consulting its tax solicitors, Aeon Credit said the company is of the view that there are reasonable grounds to challenge the validity of the notices of additional assessment raised by the Director General of Inland Revenue and the penalties imposed.

“This is especially so when at all material times, the company had sought professional advice from an independent and reputable audit and tax firm on its accounting and tax treatment and further, the assessments for the years of assessment of 2010 and 2011 are time barred,” it said.

Aeon Credit said it will make further announcement if there is any material update on the matter.

Aeon Credit is not alone within the companies listed on Bursa to be visited by the tax authorities.

S P Setia Bhd’s unit was slapped with a back tax bill of RM75.38 million last month, but the company said it has grounds to contest the notice.

In that same month, Country Heights Holdings Bhd announced that its executive chairman and major shareholder Tan Sri Lee Kim Yew had his fixed deposits of some RM126 million placed in a foreign-owned bank seized by the IRB in relation to RM22.5 million worth of tax liabilities incurred by Country Height’s wholly-owned unit Country Heights Sdn Bhd. The tax liabilities were accrued from the years of assessment of 1997 and 1998.

In April this year, the IRB slapped Tenaga Nasional Bhd with an extra RM2.07 billion tax bill for the 2013-2014 tax years. In October 2016, the IRB also went after a subsidiary of Mega First Corp Bhd for RM22.8 million.

Aeon Credit shares closed up eight sen or 0.61% at RM13.24 yesterday, with a market capitalisation of RM3.28 billion.