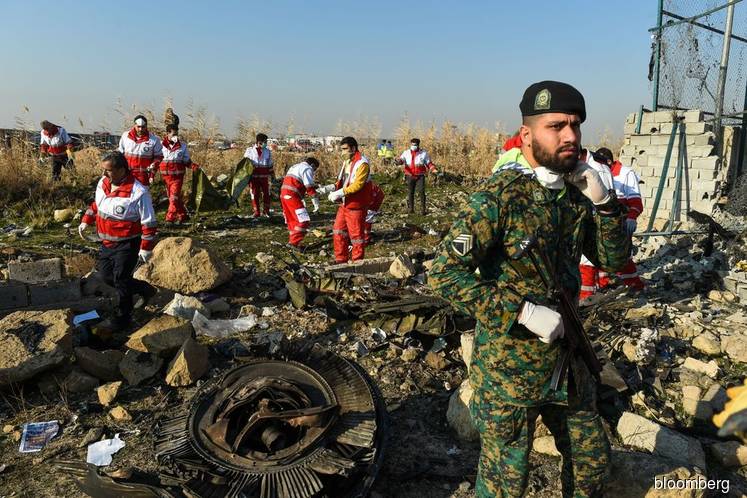 TEHRAN/ MINSK, Belarus (Jan 9): The Boeing Co jet that crashed near Tehran on Wednesday tried to turn back after takeoff, Iran revealed in an initial report as Ukraine said it’s examining scenarios including a missile strike and terrorism.

Ukraine International Airlines Flight 752 disappeared from radar screens at 8,000 feet, and witnesses said they saw it on fire in the air, according to Iran’s Civil Aviation Organization. The flight-data and cockpit-voice recorders were damaged but their core memory appears to be accessible, the report said.

The findings are the first officially released from a probe fraught with difficulty amid heightened U.S.-Iranian tensions. Ukraine added to confusion around the crash, saying it’s looking at whether the jet was downed by a missile or bomb after Iran had insisted it fell victim to a technical failure or engine fire.

The scenarios are among several put forward to explain the disaster, National Security & Defense Council Secretary Oleksiy Danilov said on Facebook, pointing to supposed evidence of missile debris found near the crash site and circulated on the Internet. Others include a collision with a drone or other object, as well as destruction of an engine due to technical reasons, he said.

Iran has invoked an international agreement to get assistance from other countries involved in the tragedy, and Danilov said the Ukrainian contingent includes experts who participated in a probe into Malaysia Airlines Flight 17, downed in 2014 by a surface-to-air missile during the conflict in Crimea.

American agencies including the National Transport Safety Board are weighing whether it’s legal to engage with Iranian authorities under terms of sanctions against the country, according to people familiar with the matter. They’re also concerned about sending people to Iran given recent military strikes.

“"First of all, it's a tragedy for the whole world.”@fly_uia held a vigil at Kyiv's Boryspil International Airport for #UIA crew members and passengers killed in the #PS752 flight that crashed in Iran — QuickTake by Bloomberg (@QuickTake) January 9, 2020

The latest comments from Ukraine add to confusion about what led the Kyiv-bound 737-800 to plunge from the sky near Tehran, minutes after taking off, killing all of the 176 people aboard.

A video purportedly shot by a bystander showed flames coming from the jet as it streaked across the night sky and burst into a fireball on impact. “The plane is on fire,” an unidentified male can be heard saying. “In the name of God, God help, call the firefighters.”

Iranian authorities initially blamed technical issues and then an engine fire. Ukraine International said it didn’t “even consider” the possibility of crew error, and the Ukrainian embassy in Tehran ruled out terrorism before amending its statement to offer no comment on possible causes.

Ukraine President Volodymyr Zelenskiy on Thursday called on parties not to “manipulate” the events, saying no conclusions can be drawn until experts have considered all of the evidence.

The recently serviced, three-year-old Boeing — different to the company’s grounded Max model — went down without a distress call and after its global-positioning transmissions were unusually cut off mid-air. The crash came in the wake of an Iranian missile attack on two Iraqi military bases, in retaliation for an American drone strike last week that killed one of Iran’s top generals.

Under the United Nation’s International Civil Aviation Organization, crash probes are led by the nation where a plane was destroyed. In addition, countries where the aircraft and key components were made usually take part.

The U.S. NTSB routinely participates in dozens of crash investigations around the world, under the ICAO process known as Annex 13.

By notifying ICAO, Iran suggested it might be open to U.S. help in the probe, said the two people. But the Islamic Republic has sent mixed signals, with some officials being quoted as saying they would not allow Americans to analyze the plane’s two crash-proof flight recorders, for example.

American law also prohibits the NTSB from working in Iran because of longstanding bans on conducting business in that country. The NTSB has occasionally assisted in accident investigations there, but had to obtain special permission from the U.S. Treasury.

“The NTSB is monitoring developments surrounding the crash of Ukraine International Flight 752 and is following its standard procedures for international aviation accident investigations, including long-standing restrictions under the country embargoes,” the agency said, adding that it was working with the State Department to determine a course of action.

The State Department offered assistance to Ukraine, but notably didn’t mention helping Iran. “The United States calls for complete cooperation with any investigation into the cause of the crash,” the department said.

“Canadians have questions and they deserve answers.”

Canada’s PM @JustinTrudeau pays tribute to the 63 Canadians killed in the crash of the Ukraine-bound #PS752 flight in Iran — QuickTake by Bloomberg (@QuickTake) January 9, 2020

Some aviation safety experts said the plane’s sudden fall as it apparently was engulfed in fire, might have been from a bomb or missile.

“Airplanes don’t just catch fire and have that fire spread like that in such a short period of time, unless there was an intentional act causing that fire and explosion,” Jeffrey Guzzetti, former chief of the U.S. Federal Aviation Administration’s accident investigation division said in an interview.

This is a tragic event and our heartfelt thoughts are with the crew, passengers, and their families. We are in contact with our airline customer and stand by them in this difficult time. We are ready to assist in any way needed. — The Boeing Company (@Boeing) January 8, 2020

It’s at least theoretically possible for a fast-moving cargo fire to take down a plane, said Roger Cox, a former NTSB investigator. A ValuJet plane crashed in Florida in 1996, after pure oxygen caused a raging inferno, he said. But in that case, the plane flew for about 10 minutes, far longer than the Ukrainian jet.

The tragedy strikes during a deeply challenging period for Boeing, gripped by one of the worst crises in its 103-year history, after two deadly crashes involving the 737 Max led to its global idling in March.

Earlier 737s like the one that came down in Iran, don’t use the flight-control system implicated in the Indonesian and Ethiopian events. The crash was also the first at Ukraine International since it was set up in 1992.

Engines for the single-aisle plane are made by CFM International, a venture of General Electric Co and Safran SA. A representative didn’t comment on the details or possible cause of the crash but said by email that CFM extends “heartfelt sympathies to the families and loved ones of those on board.”

Boeing’s shares slid 1.8% on Wednesday, their biggest loss since Dec 16. The company hasn’t commented on possible reasons for the crash.