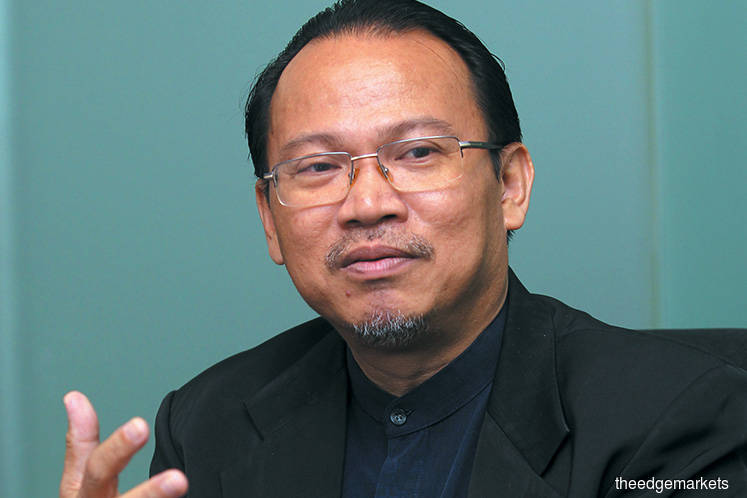 I noticed that the universities themselves are a bit slow in embedding new content that is relevant to the digital revolution. This is why it is still hard to get talent; we are still cooking them in the universities. > Mazlan

Today, the Internet of Things (IoT) is no longer a buzzword. There is a clear need for it as businesses around the world are looking at the technology as an enabler of sustainability, safety and economic growth. Yet, despite the growing need, the development of IoT in Malaysia has not taken off at a desirable pace. In fact, the Malaysian government is still in the process of formulating the National Industry 4.0 blueprint, expected to be ready before the end of the year.

This slow development is because of a few contributing factors, according to Dr Mazlan Abbas, co-founder and CEO of homegrown Favoriot Sdn Bhd. The biggest problem at the moment is a lack of talent and industry professionals. “Last year, Malaysia Digital Economy Corp (MDEC) said there needed to be 20,000 data professionals by the year 2020. I think this number should be multiplied by five,” he says.

Mazlan explains that when it comes to IoT, a skilled workforce is needed in all of its components, such as sensoring, networking, cloud, applications and systems integration. “The minimum number of skilled workers needed is five per component. Twenty thousand is definitely not enough; 100,000 should be the correct number of professionals needed by 2020,” he says.

The former lecturer at Universiti Teknologi Malaysia has overseen the development of IoT-ready talent in a lot of universities, but the situation does not look promising to him. “In fact, I noticed that the universities themselves are a bit slow in embedding new content that is relevant to the digital revolution. This is why it is still hard to get talent; we are still cooking them in the universities,” he says.

To help generate IoT-ready talent, Favoriot has partnered 15 Malaysian universities and one Singaporean university to teach students how to build IoT solutions using the company’s Favoriot IoT Middleware. Mazlan explains that the IoT Middleware acts as a horizontal (wide-use) platform, allowing IoT developers to connect sensors (such as temperature and light sensors) and collect data to create their own problem-serving vertical (specific) applications.

“With the data collected, they can create applications that can monitor parking availability, control room humidity, and many more. At first, we wanted to provide this platform to companies that wish to develop their own IoT applications, but we found that in Malaysia, there are very few people who would have the necessary skills to operate it. So we went to the universities, let them be creative and play with it for class and projects. Afterwards, they will be well versed in creating the applications, thus bridging the talent gap,” says Mazlan.

The sluggish development of IoT in Malaysia is also caused by the reluctance of large corporates to invest in the technology, he says. “[Business management consultant] Gartner in a report says that by 2018, about 50% of the companies that embark on IoT will be start-ups. When it concerns something as new as IoT, a company needs to move fast, learn fast and fail fast, to understand what works and what does not.

“Big companies won’t do this because it is too risky. That’s why it is up to the small players like us. But for us to move quickly, we need funding, which is still lacking here in the country,” says Mazlan.

However, he is happy that the Malaysian regulators are being supportive of innovation. In June last year, Bank Negara announced the phased liberalisation of motor and fire tariffs, which has indirectly helped escalate the growth of IoT platforms and services. “The liberalisation of motor insurance has really allowed the country’s IoT solutions to take off. With IoT-connected devices, insurers can determine pricing by measuring how carefully people drive. This is the kind of supportive environment that we would love to work in,” says Mazlan.

Favoriot IoT Middleware is only one of the many projects that Mazlan is working on with his team. Out of the seven members of Favoriot, four have a PhD. Mazlan himself is a prominent global champion of IoT, ranked as a top 20 thought leader in IoT by software provider Onalytica in 2014 and top 10 in the list of IoT Influencers by US-based IoT company, Postscapes.

Mazlan held various positions in Celcom and MIMOS Bhd before venturing into IoT with REDtone IOT. After more than two years with the company, he decided to start Favoriot. “Our first project is called Favorsense, which is a ‘crowd-sensing’ application. It is a smart-city solution intended to help any party monitor and resolve reports regarding faulty facilities. Sometimes a municipal employee sees the problem and fixes it, but oftentimes it is not reported, thus no action is taken to resolve it,” he says.

With Favorsense, users can snap a photo of the problem, geo­tag and submit it to the authorities, he says, adding that it can be extended to condominiums and even campuses. “For example, if there are cracks on the dorm wall or if the drain is clogged, students can just snap a photo and wait for the problem to be resolved by the dorm manager.

“Anyone with the application can make the report. This is proper crowdsourcing, not just putting it up on Facebook and asking

others to make it viral,” Mazlan says.

The Favorsense platform aims to ease engagement between the community and the facilities management team by making reports transparent and more efficient. It replaces the need for the community to write emails or call the management, and they get notified when their reports are resolved. The platform can be accessed on a subscription basis, which means that clients are not required to fork out huge amounts to build their own servers.

In the US, one successful company doing something similar is SeeClickFix, a platform that connects the community with their local government. Launched in 2008, the platform now covers more than 25,000 towns and 8,000 neighbourhoods. As at Sept 15, the company claimed that it had addressed over 3,178,007 reports.

However, Mazlan says that the idea of the platform is not solely for making and resolving complaints but to help build a smart city through the eyes of the citizen. It is for the local councils to gather data on the citizens’ pain points using IoT technology and work out solutions to address them. “For example, if citizens have parking problems, they can develop a smart parking solution. If the problem is the garbage, then perhaps the local council or the authorities can look for ways to smart-manage the garbage.

“The thing is, not all cities suffer from the same problems, which is why smart city initiatives fail. They spend millions of dollars trying to duplicate the success stories of other cities instead of identifying the problems in their own. What we do is create the tool for them to gather the pain points from the citizens’ point of view. Once they have the data, the massive investment required to solve the problem makes sense,” he says.

Malaysia has an ageing population. Datuk Seri Rohani Abdul Karim, the Minister of Women, Family and Community Development, recently stated that the number of senior citizens is projected to double to 5.8 million within the next 13 years. The country’s senior citizens also jumped to 14% from 7% of the entire population in just 28 years. Sweden took 112 years to reach the same level.

“It is not just our country; many countries have senior citizens exceeding 20% of the population,” says Mazlan. “In Europe, there are many issues with the ageing population as the children leave home at 18. In China, it is worse, thanks to the one-child policy. The parents are left alone, unattended. They go missing because of Alzheimer’s. In fact, 500,000 people go missing every year in China. Whenever they are found, 25% go missing again. It is a major problem.”

Outside cities, it is not the norm to send elderly parents to care centres. Most parents are left to fend for themselves, with little monitoring from their adult children as the latter would be busy at work somewhere else. Due to their age and infirmity, seniors easily get into accidents, and their injuries take a long time to heal.

“We want to solve the problem of elderly care — reduce healthcare costs, make sure that the seniors don’t go missing, manage their health conditions and quickly detect emergency cases. We also want to assuage the guilt of people who are not able to look after their parents due to work,” says Mazlan.

After many months of development, Favoriot is launching Favorwatch, a wearable for the elderly under its Favorhealth project. With Favorwatch, people can monitor their parents to ensure that they are doing well at all times. “There are a lot of things that Favorwatch can do. For one, it can notify you once your parents are outside a certain radius of their house. Once this happens, you can contact them and ask if something is wrong. If they are lost, you can locate their exact coordinates. You can even alert the police if you can’t contact them and are worried.

“There is also a feature to detect force. If your parents fell, for example, it would be detected and you would be notified. There are even certain numbers that the device would automatically call,” says Mazlan.

Other capabilities of Favorwatch include electrocardiogram (ECG), blood pressure and heart rate detection to understand the wearer’s health condition. It is also able to give schedule-based notifications to remind the wearer to take their medicines, says Mazlan.

As Favorwatch collects and keeps the data of the wearer, it should be able to predict and avert emergencies. “This is why I think wearables are important. It can detect a lot of parameters. It can detect sweat, temperature, number of steps, everything. We can tell when the person is going to fall, so the right parties will be notified. We want to predict the future. That is our objective. However, we do need the patient’s consent, so we will not be using the data if they do not want it to be analysed,” says Mazlan.

He explains that although Favorwatch is not yet a proper medical device, it can be such once the technology matures. The device can be connected to hospitals and health professionals, allowing doctors to give their second opinion. However, to make this work, Mazlan says that a certain agreement has to be made with doctors and other organisations, thus needing a longer time frame.

Favoriot is also looking for ways to eliminate the need for the senior citizens to wear the devices at all times. “We are working with partners to find a better solution in the house without the need for them to be attached to the device. The house itself can be the clinic, the doctor and the eyes of the children. Right now, we are thinking of using cameras with sensors that would detect abnormal activities inside the house,” says Mazlan.