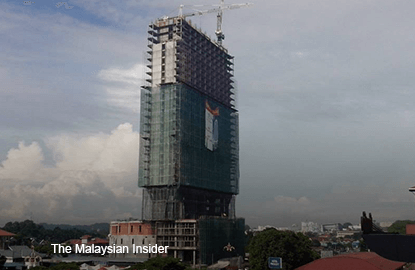 (July 23): About 300 investors are left in the lurch after construction work on The Boss Services Suite, one of Klang’s most talked about development projects, has been abandoned halfway, the StarMetro reported.

The multi-million ringgit project, a high-rise residential hotel suite with commercial space, was supposed to have been by Hotwer Development Sdn Bhd.

Units were sold between RM250,000 and RM900,000 and most of the buyers were believed to be from outside Klang, Selangor.

The project, which kicked off in 2012, was abandoned towards the middle of last year, the report said.

The project, located near the Hokkien Association Hall, was supposed to have been a new landmark for the royal town but instead, it has become an eyesore.

According to the buyers, units in the project were sold through roadshows organised in popular malls in the Klang Valley.

Lack of information and uncertainty over the status of the project had left the buyers in the dark, especially since they had been informed in February that the development was in the hands of a liquidator.

They had received letters from KPMG Deal Advisory Sdn Bhd, informing them that in November 2014, the company had been appointed liquidator by the Kuala Lumpur High Court, the StarMetro reported.

KPMG had also called for a meeting with the purchasers and creditors to discuss the next course of action.

The Boss Purchasers Association (TBPA) vice-president Heng Hock Lai said the meeting had been fruitful and the buyers were confident the project would be revived soon.

He said experts had been called in to ascertain the completion rate of the project.

“We have also requested that the buyers be called in for meetings with potential developers so that our interests will be protected.

“We believe the new contractor will be able to complete the project without adding more costs to us,” he said, adding that he had bought a commercial unit for RM816,000. – The Malaysian Insider