DIGISTAR CORP BHD has been in the news for securing a couple of projects and lining up several catalysts ranging from construction projects to potential digital terrestrial broadcast (DTTB) contracts. The group is also tendering for over RM2 billion worth of projects, which is a huge sum compared to its market capitalisation of RM116.3 million.

These, however, have not been reflected in its share price, which has been choppy at best. Digistar’s share price closed at 25.5 sen last Thursday, down 5.5% from a year ago. Taking advantage of the weak share price, major shareholder and group CEO Datuk Wira Lee Wah Chong has been accumulating shares on the open market.

“I am buying the shares because I do not want someone else to come and take over the company,” Lee tells The Edge.

He has accumulated over 14.92 million shares in Digistar at an average price of 28 sen per share this year. Together with a 10% private placement that was concluded on Nov 4, Lee has an estimated 22.8% stake in the company.

The main catalysts in the pipeline for Digistar include its central monitoring system (CMS) business, property development and an estimated RM2 billion in contracts that the company is tendering for, including the DTTB subcontractor works.

Lee cannot share the details of the jobs Digistar is bidding for, but he is optimistic about the company’s chances. He is also confident that the subcontract packages for the DTTB project will be opened for tender soon. The project, which involves the development of DTTB infrastructure nationwide, was awarded to billionaire Tan Sri Syed Mokhtar al-Bulkhary’s Puncak Semangat Sdn Bhd early this year.

“There are two portions of the project. We are less interested in the transmission side, which has a very wide scope spanning the entire country. We will focus on building the multimedia hub in Cyberjaya. It is very similar to the RM30 million job we just completed for Pinewood Studios in Iskandar, Johor,” Lee says.

Digistar has come under criticism recently for its sudden diversification into a number of different businesses, led by speculation that the group’s long-time source of work — Astro Malaysia Holdings Bhd — may be running out of jobs for Digistar.

“We are one of the few players in the world that can do analogue to digital migration for broadcast. Astro has already migrated but there are many more jobs that can be done in the region. Electronics companies are already phasing out analogue televisions. Soon, the world will have to migrate to digital and we can do the migration.

“People say that we lack focus, but what does that mean? When you see a good opportunity, will you pass it up?” asks Lee, referring to the group’s serviced apartments, The Heritage, in Melaka.

He says the project has managed to garner a 90% take-up rate at an average price of RM1,200 psf — “the highest in Melaka and even comparable to Kuala Lumpur prices”.

The units are fully furnished and sold on a profit-sharing arrangement, where they will be let out like hotel rooms. Once the project is completed early next year, it will start generating recurring income for the group.

“Our core business will continue to be ICT (information communications technology). We are still new to property development, so I am very careful with the projects that I plan to do. The Heritage is a one-off, but if a good opportunity turns up, we will consider it,” he says.

The company posted a net profit of RM2.5 million for the first half ended June 30, 2014, which was 52% lower than the previous year, due to lower revenue recognition in system integration. It has RM244.67 million in cash against RM217.62 million in borrowings, which are almost entirely long-term in nature.

Despite the seemingly healthy balance sheet, the group has undertaken a 10% private placement that was concluded in November and raised nearly RM280 million in bonds for the construction project. The group has also refrained from paying any cash dividends over the past few years. 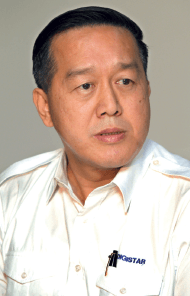 Digistar is preparing for an aggressive and rapid expansion of its CMS business through Panther 911, a centralised system used to monitor closed-circuit television (CCTV) footage for security purposes. The business already has some 5,000 customers, and Lee plans to expand this to 500,000 over the next five years.

The target seems aggressive, given that the home security market currently services only 30,000 homes and businesses. However, Lee says the prevalence of crime and the value-added of the new technology will attract more people to use the product. The system includes services such as a personal GPS tracker that can be used to track users in the event of kidnapping.

“Every week, we prevent at least one break-in. We have access to the live footage, so we can see what is happening and respond appropriately when an alarm goes off. In older systems without live CCTV feed, the operators cannot see the situation on the ground. Often, there are false alarms that use up a lot of resources,” he says.

The CMS cameras are available from RM1,000, and the monthly service charge is around RM100, which is where Lee plans to make long-term recurring income. He estimates it will take about 18 months for Digistar to recover the equipment cost.

The group recently signed an agreement with DiGi.com Bhd to supply 3G SIM cards to its customers, which will allow the security system to continue transmitting images to the command centre even if land lines are cut — a feature that competitors are not able to offer.

To acquire new customers, Digistar plans to establish its own retail network and acquire more businesses. The group is acquiring a 70% stake in Protecs A&A CMS Sdn Bhd, and Lee says more acquisitions are in the works.

As for the retail network, Lee plans to use a model that is similar to Cosway. It distributes personal, health and homecare products via a network of stores and stockists.

“I plan to invest about RM5 million to open 25 retail outlets around the country to market this product. Digistar will not operate these outlets; it will hand them over to selected business partners that will make money through a profit-sharing arrangement. For example, the operator will make RM50 profit from the monthly fee in the first month and RM10 per month thereafter,” explains Lee.

At the least, the rollout of these outlets will improve Digistar’s public profile while allowing investors to gauge the effectiveness of its business plans.