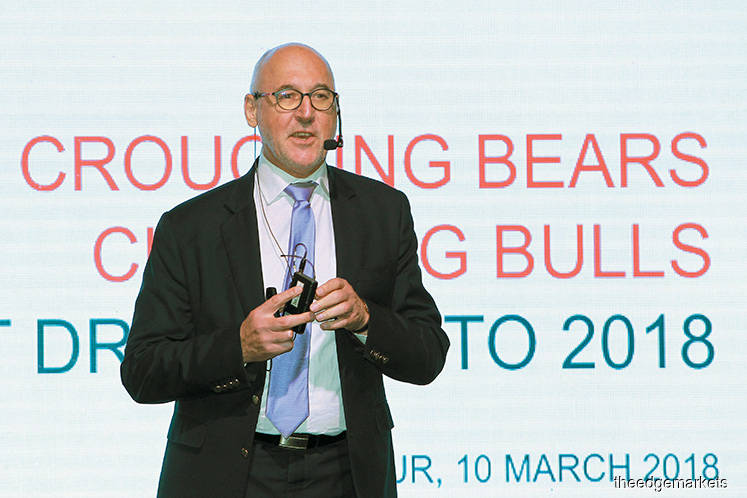 There are also opportunities in many cyclical stocks that have yet to fully participate in the rallies due to unfounded fears of global growth, says Rountree. “There is plenty of value out there, even though we expect higher volatility this year, as last year’s main drivers are still intact. Hopefully, we will see more opportunities further down the road as valuations pick up.”

Some of Asia’s and emerging markets’ strongest equity rallies in several years took place in 2017, accompanied by attractive headline valuations, supportive macroeconomic conditions and improving corporate earnings. This year, there is strong evidence that the market bulls will continue charging ahead, says Rountree.

For one, corporate earnings in many parts of the world have been upgraded this year and are expected to do well going forward. However, the markets have been jittery as investors question their good luck so far and are actively looking for crouching bears,” says Rountree.

Another thing investors are concerned about is slower liquidity. However, Rountree says it is not dramatically slowing. Also, the interest rate hikes do not appear threatening.

For example, the US Federal Reserve has been relatively clear in its intention to hike the interest rate by 0.25% this year. And the trajectory is viewed as being underpriced by the interest rate markets in the US.

“Real interest rates adjusting for inflation have to go up to somewhere between 2.5% and 3% before they start following growth. While the concern is valid, it is not a killer,” says Rountree.

The last bear that investors are observing is the US jobs market, he points out. That is because most of the jobs created are for those aged 55 and above — an age group that is more likely to save than spend, says Rountree.

“About 27 million jobs have been created since the global financial crisis, which is great. But the problem is where the jobs are created. The bulk of them are for those aged 55 and above,” he adds.

“What do you think 55-year-olds are going to spend their money on? Why do they need to return to the job market in the first place? More jobs for this age group won’t boost spending.

“That said, while there are crouching bears out there, we have to put the bears under a magnifying glass to make sense of it. In fact, these are tiny bears.

“We continue to anticipate solid growth this year. While forecasts are generally at slightly lower levels than recorded in 2017, the door is tantalisingly ajar to allow possible upgrades as the year progresses.”