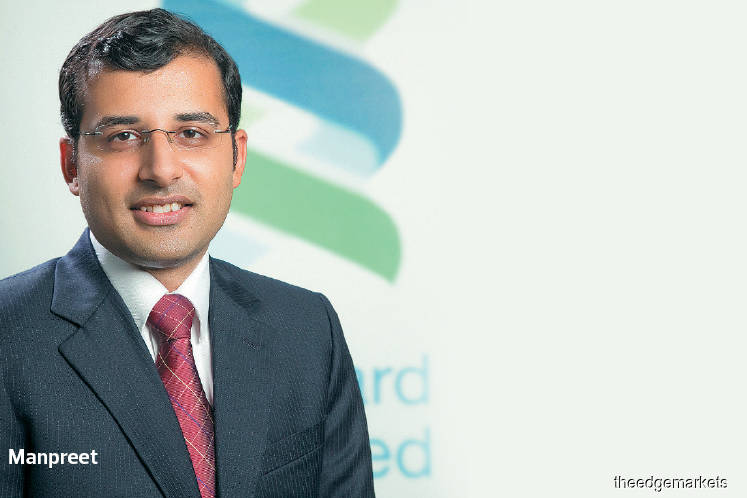 This will be a year to “prepare and react” as investors brace for more volatility amid a slowdown. While portfolio diversification is important, investors need to balance that against the need to take advantage of opportunities that temporary volatility often creates, says Standard Chartered Bank.

Manpreet Singh Gill, StanChart’s head of fixed income, currencies and commodities (FICC) strategy, tells Personal Wealth that while economic growth around the world is undoubtedly slowing, investors should differentiate a slowdown from “falling into recession”.

“In our view, the US, in particular, is slowing from unusually strong levels of growth to one that is more consistent with long-term trends. This, we believe, is a positive outcome for financial markets. However, history shows that late-cycle equity and bond market returns tend to come with higher volatility than usual,” he says.

Even so, Manpreet believes that the US will garner the most investor interest and outperform other regions. Growth data remains arguably the strongest overall and US markets have historically outperformed in late cycles.

China is another country that Manpreet says will see investor interest. Onshore equities fell significantly last year, but may be poised to rebound the most as risk appetite recovers globally.

There may be renewed interest in many major emerging markets, he adds. “Although emerging markets suffered, particularly in the first half of 2018, we expect gains from the US dollar to stay capped. This means emerging markets may look interesting again, although getting the right asset class exposure will be key.”

For 2019, StanChart has adopted a much more balanced position between equities and bonds as the banking group believes it makes sense to focus on regional opportunities within each asset class. Manpreet explains, “In equities, we expect the US will outperform other major regions, given growth and historical outperformance during a late cycle. Asian equities should follow closely, particularly in North Asia, where valuations have cheapened significantly.

“In bonds, we favour emerging market US dollar government bonds as we believe they offer a combination of attractive yields [and valuations] for a well-balanced mix of investment grade and high yield.”

Meanwhile, key tailwinds for 2019 include continued positive growth across most major regions. The pause in Fed rate hikes is another key positive. In addition, meaningful progress on the US-China trade spat, should it materialise, would be a big plus. “We believe the market simply needs less bad news to rebound from,” says Manpreet.

“A few risks we are monitoring include the pace at which the Fed tightens policy over the course of the year (we expect two rate hikes) and any renewed rise in US-China trade tensions later in the year, even if we get some sort of deal before then. We also believe economic growth remains weak in the eurozone, so be on the watch for any spillover effects.”

As for Brexit, StanChart’s position is that a “no deal” Brexit is the most likely outcome. “While it is much more difficult to foresee which of the possible alternatives will finally play out, we believe that for financial markets, any outcome other than a “no deal” Brexit is likely to lead to a positive reaction,” says Manpreet.

“Although the avoidance of a hard Brexit is by no means a done deal, most recent efforts are working towards reducing the chances of such an outcome. This suggests an interesting GBP/USD opportunity. We would be buyers on any dips towards US$1.27. This is because recent history since the Brexit vote, as well as underlying fundamentals, suggest that the currency pair should be significantly higher in most outcomes that avoid a hard Brexit.”