Investing: A review of M-REITs 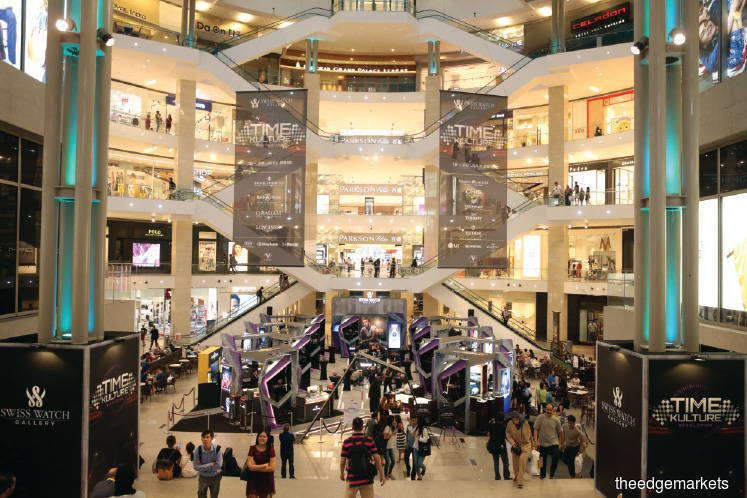 In today’s context, retail malls are no longer a shopping destination, but rather a lifestyle destination where consumers congregate for social and family purposes The Malaysian real estate investment trust (M-REIT) industry kicked off the past decade with a bang. It saw rapid growth in the first half of that 10 years, with its market capitalisation almost quadrupling from RM9.64 billion in 2010 to RM35.65 billion in 2015. Four players entered the space during this period, bringing the total to 17 players listed on the local bourse.

“Institutional investors — especially sovereign, pension and insurance funds — are one of the main contributing factors in driving the demand for REITs as they generally seek stable distribution yields. By virtue of the size of these funds, they have the capacity to subscribe for initial public offerings (IPOs) and equity fundraising activities to further drive the growth in market capitalisation,” says Ng, who is CEO of Sunway REIT Management Sdn Bhd.

“After the 2008 global financial crisis, there were times of uncertainties in the economy and global financial markets. This supported the demand for REITs as funds were flowing out of developed markets into Asia.”

However, the industry’s growth gradually slowed in the second half of the decade. There have been no new REIT IPOs since the listing of KIP REIT in 2017. The industry’s market capitalisation expanded to RM44.2 billion in 2016, but contracted to about RM41 billion in the next two years.

Ng says the lack of new REIT listings during this period was due to slow market conditions and a mismatch of expectations between the yields investors wanted and what the REIT sponsors could offer. “For example, investors may expect at least a 6.5% distribution yield to subscribe for the IPO. However, the sponsor is only able to provide properties that generate yields of 6% and below to the pre-listed REIT. So, the listing may be delayed or cancelled because the REIT is unable to meet investor expectations.”

A sponsor is a company or entity that has agreed to sell properties to the REIT. Normally, a sponsor provides support for an IPO by injecting properties into the initial portfolio of the REIT for the listing process.

Nevertheless, the distribution yields of local REITs have been attractive in the past 10 years, he adds. “The yields of M-REITs hovered between 6.5% and 7.5% for the most part of the decade. The REITs delivered an average annual return of 8% to 15%.

“With the exception of the 2008 global financial crisis, distribution yields spiked to 8% and above on the back of steep contractions in unit prices in tandem with the correction of the equity market.”

According to KIP REIT CEO Chan Heng Wah, the healthy performance of M-REITs was also due to the low interest rate environment and lower government bond yields. “REIT share prices were also supported by the recent downtrend in the yields of the 10-year Malaysian Government Securities (MGS). Policymakers are anticipating another overnight policy rate (OPR) cut by Bank Negara Malaysia in the next six months,” he says.

“On the global front, the market is expecting further rate cuts by the US Federal Reserve as global growth has been decelerating while the US-China trade war is still ongoing. The yield of the 10-year US bond has already fallen to 1.7% from 2.7%. The lower interest rates generally work in favour of REITs as investors look for alternative yield-accretive investments.”

One of the turning points in the industry were the changes made to the REIT guidelines in April 2018 by the Securities Commission Malaysia (SC), says Chan. The new guidelines allow M-REITs to undertake property development activities such as construction, the redevelopment of a building or an extension to an existing building.

“The guidelines act as a catalyst to encourage built-to-suit (BTS) properties as they have higher potential for better net property income yields and allows REITs to own high-quality products built to specifications,” he says.

Leong Kit May, CEO of Axis REIT Managers Bhd, says that prior to the changes in the guidelines, REITs were not allowed to develop their properties. “Axis-REIT subsequently pushed for REITs to be allowed to do so. Later, we managed to get exemptions to develop two BTS properties. Thus, we believe that we played a role, to some degree, in the SC’s decision to introduce the new guidelines that allow REITs to develop properties.”

Under the new guidelines, Sunway REIT embarked on its maiden property development activity with a new wing at Sunway Carnival Mall in Seberang Jaya, Penang. The extension would bring the expected net lettable area to 830,000 sq ft.

According to Ng, Malaysia is currently the fourth largest REIT market in Asia-Pacific, after Japan, Singapore and Hong Kong. Despite the encouraging growth of M-REITs in the past decade, the industry still lags behind its Singaporean peers. “Singapore REITs (S-REITs) started about the same time as M-REITs. However, the S-REIT industry has grown phenomenally to RM332 billion in market capitalisation — more than seven times the size of the M-REIT industry,” he says.

Ng attributes the stellar performance of S-REITs to the city state’s tax regime, relatively favourable listing requirements and status as a regional financial hub, which have attracted global fund flows to the REIT industry.

Nevertheless, M-REITs have their own strengths. “Although M-REITs are a relatively smaller market than S-REITs, they are typically more resilient and defensive. This is mainly due to a higher percentage of domestic holdings, including sovereign and pension funds, which provide a certain degree of stability to unit prices,” he says.

According to global data company CEIC, the total market size of Bursa Malaysia was estimated to be RM1.71 trillion last month while M-REITs made up less than 3% of that.

Chan says M-REITs depend largely on rental revisions rather than acquisitions for income growth. As a result, the local REIT market is seen as relatively small compared with its regional peers such as Taiwan, Singapore and Hong Kong, which makes attracting foreign funds challenging.

“In terms of capital value, the local REIT market is seen as relatively small when compared with our regional peers. And it can be considered too small due to the low exchange value of the ringgit.

“Also, the small market capitalisation of the REIT market means that larger investors are unable to make consequential investments that can maintain their liquidity. As a result, investors argue that [is why] M-REITs have a slow growth rate.”

Ng warns of an oversupply situation in the retail subsector, which has led to a highly competitive market and potential dilution in market share. This, in turn, has put pressure on occupancy rates and rental reversion growth. “[The industry] needs to acknowledge the challenges facing the retail subsector and the need to proactively evolve to be ahead of consumer trends and competition,” he says.

“In today’s context, retail malls are no longer a shopping destination, but rather a lifestyle destination where consumers congregate for social and family purposes. So, mall owners need to reposition their malls as experiential lifestyle malls that offer refreshing experiences to consumers.”

“We believe that these refreshing and unique experiences will appeal to existing and new [consumers who make up the footfall] at the malls. Strategies include creative marketing activities, capitalising on new marketing channels such as social media and the use of the Internet of Things (IoT) and data analytics to increase brand building among tenants such as flagship brands and local brands.”

Currently, the four biggest M-REITs alone account for 73% of the local REIT sector in terms of market capitalisation while retail malls constitute a massive portion of their portfolios. The MRMA expects the oversupply issue in the retail subsector to intensify in the near future.

Despite the headwinds and the need for the industry to innovate, Ng and Chan are optimistic about the outlook for the sector. Chan is expecting more interest rate cuts in the future, which will be favourable for the REIT industry.

“Last year, the 10-year Malaysian government bond yield dropped about 60 basis points (bps) to 3.4% from 4.08% and the market is anticipating lower interest rates going forward. This suggests that M-REITs’ valuations will still hold up,” he says.

“A low interest rate regime will result in lower borrowing costs for REITs. In fact, it is a good time to source and acquire future assets. KIP REIT has successfully launched its RM2 billion perpetual medium-term notes programme and has already benefited from lower borrowing costs.”

Ng remains positive about the prospects of the industry. He cites pockets of opportunities in the residential subsector while expecting to see potential consolidations in the industry.

“In a moderating economic environment coupled with challenging property market conditions, we expect more acquisition opportunities to prevail. Currently, it is very much a buyer’s market. Sponsors with stretched balance sheets may wish to de-gear to strengthen their balance sheets. However, there is still a yield gap between the sponsors’ asking prices and valuations acceptable to the REITs,” says Ng.

Sunway REIT is actively seeking opportunities through third-party acquisitions in the current market climate. “In 2011, Sunway REIT acquired Sunway Putra, a three-in-one mixed-use development that comprises a retail mall, hotel and office tower. We demonstrated our turnaround expertise in this acquisition, transforming the depressed and dated property into a performing asset in today’s market,” he says.

“Over the medium to long-term horizon, we see opportunities for the REIT to venture into the residential rental home space, with potential to offer more affordable rental homes to the deserving public as one of the alternatives to homeownership programmes.”

Following Axis-REIT’s entry into the market as the country’s first REIT in 2005, there were many more “firsts” for the sector in the subsequent years.

In 2006, Al-Aqar REIT became the country’s first Islamic REIT. And the following year, Al-Hadharah Boustead REIT was launched as the first plantation REIT.

It has become the largest REIT in the country. As at last month, KLCCP Stapled Group had a market capitalisation of RM14.41 billion — more than double the size of the next largest REIT, IGB REIT, at RM6.85 billion.

In 2013, Boustead Holdings Bhd took Al-Hadharah Boustead REIT private after being listed on Bursa for six years, citing the need to consolidate its plantation assets under Boustead Plantations Bhd.

In 2017, Bursa launched the Bursa Malaysia REIT Index to provide investors a clearer view of the performance of local REITs. That year, Alpha REIT was launched as the country’s first education REIT, but it is currently unlisted at the moment.

The Malaysian REIT industry has 18 listed REITs to date, including four shariah-compliant entities and one unlisted REIT, giving the industry a total market capitalisation of RM43.4 billion as at December 2019.