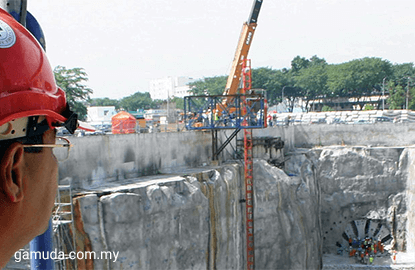 This article first appeared in The Edge Malaysia Weekly, on February 29 - March 6, 2016.

The tender, which was closed in early February before the Chinese New Year, is likely to be awarded at end-March, a source adds.

With MRT2 coming four years after MRT1, costs have gone up by 35%. For example, in the elevated portion of the tracks, cost has ballooned to RM190 million per km from RM140 million per km previously.

The tunnelling portion of MRT2 is 13.5km long and has 10 underground stations. It is 40% longer than MRT1 and has three more stations, justifying the cost of RM16 billion, compared with RM8.2 billion for its predecessor.

While details of the bid are unclear, some industry players believe that it will eventually be a two-horse race between the state-owned Chinese companies and MMC-Gamuda.

“It looks like a neck-and-neck race between MMC-Gamuda and the Chinese outfits. While MMC-Gamuda’s strength lies in its eight boring machines used in MRT1 that are ready for use, the Chinese companies, being state owned, can be aggressive and offer cheap prices simply to bag the contracts — depending on the political agenda,” the source explains.

Shanghai Tunnel Engineering, which has a US$3.7 billion market capitalisation, has undertaken jobs such as the Shanghai Yangtze River Tunnel and construction of Singapore MRT stations.

Hong Kong-listed China Railways Group, a Fortune 500 company with a market capitalisation of more than US$24 billion, is the largest integrated railway construction contractor in China.

While the Chinese companies have clout, MMC-Gamuda is no pushover. It is the project delivery partner for the multi-billion MRT1 and MRT2, and handled the RM8.2 billion tunnelling job for MRT1. It has also undertaken several other large-scale infrastructure projects such as the RM12 billion northern portion of the double-tracking rail project linking Ipoh to Padang Besar and the RM1.9 billion Stormwater Management and Road Tunnel project.

Nevertheless, some quarters noted that over the past few months, Chinese companies have been snapping up assets and contracts in Malaysia. China General Nuclear Power Corp (CGN Group) has snapped up 1Malaysia Development Bhd’s power generation company Edra Global Energy Bhd for RM9.83 billion, while the strategic investment fund has hived off 60% of its equity in Bandar Malaysia Sdn Bhd for RM7.41 billion to a consortium comprising Iskandar Waterfront Holdings Sdn Bhd and China Railway Engineering Corp (M) Sdn Bhd.

The RM7 billion electrified double-tracking rail project linking Gemas to Johor Baru was given to China Railway, with a possible partner being Fajar Builder Group Bhd.

“If the political climate indicates that they (the Chinese companies) want to get the tunnelling project, then they will stomach whatever outcome and make a strong bid … a low one, but they will have to figure out the ringgit,” the source says.