Vintage and classic cars can cost anywhere from a few thousand to a few million ringgit. But there are a number of factors that determine whether a car is a collectible and has investment value. Andrew Suresh, founder of Historic Motoring Ventures Sdn Bhd, offers some pointers in the first part of this series. 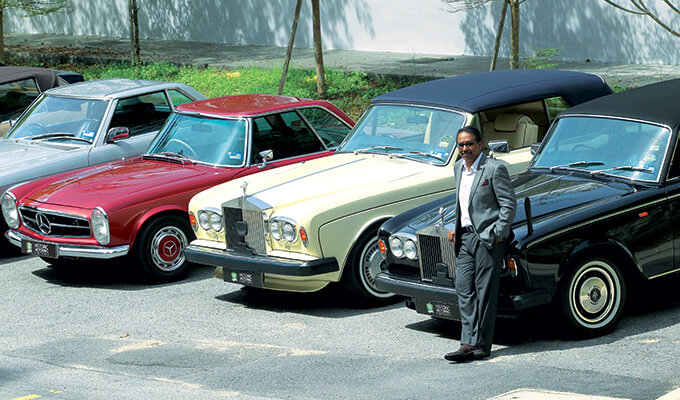 LUXURY investments offer more than just aesthetic value. They allow enthusiasts to combine their love of collectibles with the opportunity for healthy returns.

Classic cars are some of the most sought-after luxury assets. This rise in demand was noted by Knight Frank, one of the world’s largest independent property consultancies, in its Wealth Report 2015.

The Knight Frank Luxury Investment Index (as at Oct 24, 2014), which monitors the performance of nine luxury assets, namely furniture, art, watches, Chinese ceramics, jewellery, wines, coins, stamps and cars, saw a growth of 6% during the year.

In Malaysia, vintage and classic cars can cost anywhere from a few thousand to a few million ringgit. But there are a number of factors that determine whether a car is a collectible and has investment value.

Andrew Suresh, 47, founder of Historic Motoring Ventures Sdn Bhd (HMV), which organises classic car shows, says investors must know what defines a classic car and, more importantly, how to pick the right one.

“Not all classic cars appreciate. There is an element of risk investing in them. You have to choose the right car.”

And Suresh knows something about choosing the right car. At HMV’s Collectors’ Cars Private Treaty Sales Show in 2013 and 2014, held at Bangsar Shopping Centre in Kuala Lumpur, it sold a total of 15 investment-grade collector cars for RM3,186,000.

Here, he shares with Personal Wealth some tips on investing in collectible cars.

What to look out for

“A collectible car has characteristics such as rare, popular or produced in limited numbers. It must be a vehicle that is purchased for its collectible value rather than just a means of transport.

“For example, a Datsun 120Y or an early Proton Saga is more than 25 years from the date of manufacture, but these models do not necessarily qualify as classics because they were produced for the masses during that period.”

The classic car industry is driven primarily by supply and demand. The rarer and more “in demand” a car is, the higher its value. Using that same principle, Suresh says this could hypothetically apply to even models like the Datsun 120Y.

“If sometime in the future, the demand for the Datsun 120Y surpasses the availability of such models in the market, it could by virtue of its rarity qualify as a classic, in my opinion.”

He adds that vintage or classic cars that are collectibles and highly sought-after by connoisseurs or collectors will command high prices in the historic car market. “Other characteristics would include the condition, attractiveness, ownership history, production numbers and technical attributes of the car in question.”

A classic car that has investment value is usually produced by a US or European company with a long history. For example, Jaguar Cars Ltd in the UK was founded in 1922 while Daimler-Benz AG was established in 1926. These carmakers have been manufacturing automobiles for the affluent market since.

The design of a car also matters when it comes valuations. The Jaguar E-Type, for instance, has a unique spaceship-like design. Produced from 1961 to 1975, the car was released after the Space Race between the US and the Soviet Union attracted the public’s interest in space exploration.

“Everybody was so fascinated with and curious about spaceships and time travel. People imagined going to the moon. This was when car manufacturers came up with an aerospace type of car,” says Suresh.

“Later, when oil prices were low in the 1970s, US-made muscle cars [cars with high performance and powerful engines that required more petrol] such as the Ford Mustang became a favourite. In the 1980s, muscle cars were not popular anymore, and [were replaced by] Japanese-made cars. Every car represents the era in which it was made, which is very exciting.”

The Jaguar E-Type was dubbed “the top sports car of the 1960s” and “the most beautiful car” by Sports Car International magazine and The Daily Telegraph in 2004 and 2008 respectively.

Last year, Suresh helped a customer sell a Jaguar E-Type at his classic car sales show at Bangsar Shopping Centre. He sold it for RM450,000, compared with another he sold 10 years ago for RM80,000. The owner made almost a 100% profit even after deducting the RM150,000 spent on restoring the car to its original condition.

Comparable to the Jaguar E-Type is the Mercedes-Benz 230 SL, nicknamed the “Pagoda” because of the shape of its hardtop roof. “I once helped a customer sell a Pagoda to a classic car buyer. The buyer bought it for RM100,000 seven years ago. Today, it is costs half a million,” Suresh says.

The previous owners of a classic car are another reference point for investors. The more famous its owners, the higher the value of the car. For instance, a Porsche 911S that was once driven by Hollywood actor Steve McQueen in the movie Le Mans was sold for US$1.38 million in August 2011. The sum was about 40% higher than the prevailing market price, says Suresh.

“Le Mans was a movie about an auto race in the 1970s on the world’s hardest endurance course in France. The movie is still popular among race fans today. The price of the car appreciated because it was previously owned by a celebrity.”

In Malaysia, a classic car previously owned by a member of the royal family or famous tycoon might see an increase in value.

While having a famous previous owner may help increase the value of a classic car, it is even more important to make sure that the car has a good ownership record. Suresh says this is crucial. “The record of ownership proves that the car is clean and genuine, and has not been illegally transferred.”

It is also important to know how the car has been maintained. Maintenance usually involves changing the engine oil, battery, brake pads, tyres and spark plugs. The cost of maintenance will be low if the car is bought in a well-restored condition. However, if there are parts that need to be replaced, they can be ordered online. Car manufacturers with long histories, such as Jaguar and Mercedes-Benz, have their own classic car centres and websites, where you can purchase genuine spare parts.

“Unlike the old days, people can buy the original spare parts [directly] from the car manufacturer’s website. It takes a few weeks for the part to be sent to your home. After that, you can bring it to a mechanic who knows about classic cars to have it installed for a fee,” Suresh says.

“You can also Google the specification of the genuine parts and talk to people in the classic car clubs to gather information. There are some shops in KL that sell classic car spare parts,” he adds, noting that it is important to keep a classic car as genuine as possible.

Suresh says classic cars typically require minimal maintenance. “Classic cars are rarely driven on a daily basis; they are usually driven on the weekends or to car shows. Hence, maintenance and wear and tear costs on a restored car would be minimal.

This article first appeared in Personal Wealth, a section of The Edge Malaysia, on March 9 - 15, 2015.